NFC Hierarchy/Obituary: The Eagles are dead

The NFL conference championship round is here, and there are now only two teams left in the NFC. As you know, they are the New Orleans Saints and the Los Angeles Rams. What do the Saints and Rams have in common? Well, they both earned first round byes during the regular season, meaning that they only had to win one home playoff game to get to the NFC Championship Game.

The following is a history of the NFC Championship Game, and what seeds made it that far.

• There was only one occasion in which both teams earning a first round bye did not make it to the NFC Championship Game.

• The choketastic Cowboys choked twice as the No. 1 seed in the divisional round. You can read their obituary here, by the way.

My conclusion? Teams that earn first round byes have an excellent chance of advancing to the NFC Championship Game. Teams that don't earn a first round bye have a far greater hurdle to make it that far. #Analysis. That brings us to the Eagles' obituary...

The Eagles kept on fighting down the stretch and got into the playoffs because they won five of their last six regular season games, after suffering their worst defeat in recent memory to the Saints Week 11 by the gross score of 48-7.

Credit them for that. Also, credit them for knocking off the Bears in the wildcard round, and nearly pulling off a major upset of those same Saints in the divisional round. The finish to the Eagles' season, as far as I can tell, has mostly left the fan base feeling OK about the year as a whole, especially given the number of injuries the team suffered along the way.

Still, it would be disingenuous not to also note that the Eagles were extremely lucky just to get in. They needed meltdowns from the Panthers, Vikings, and WASTEAM to sneak into the second wildcard spot, extending their season, and heading into the offseason with a reason to continue to be optimistic about the future of the team.

Ultimately, however, playing three straight road games as late in the season as they did proved to be too much of a hurdle to overcome. Unquestionably, playing on the road in an extremely loud Superdome against a well-rested team put the weary Eagles at a major disadvantage. They lost their playoff game in the regular season, when they were only good enough to eke their way into the playoffs as the No. 6 seed.

The Eagles lost to the Saints in the playoffs when they:

• ...couldn't get a stop on 4th and a mile against the Titans, among many other opportunities to seal that game in Week 4.

• ...had too many major mistakes on offense against an opportunistic Vikings defense (that day, anyway), in Week 5.

• ...couldn't get a stop on a pair of crucial fourth quarter drives at home against the Cowboys in Week 10.

• ...gave up a crushing eight-plus minute TD drive in overtime to the Cowboys (though in fairness, the Eagles were also victims of the worst officiating sequence I've ever seen in that game), in Week 14.

So I guess the lesson learned here -- and it's not exactly a new lesson -- is that if you have Super Bowl aspirations, it's better to be a great team for the entirety of the season, than it is to just get hot at the end of it. A game in Week 2 means every bit as much in the standings as a game in Week 16 or 17. Going forward, this season should serve as a reminder that championship teams must play with as much urgency and determination early in the season as they do late. 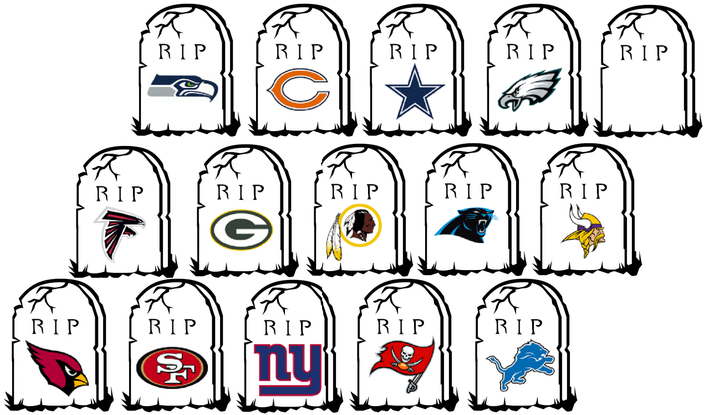 Let's just skip that, because I kinda need to have something to write in in NFL Conference Championship picks post. Thanks.