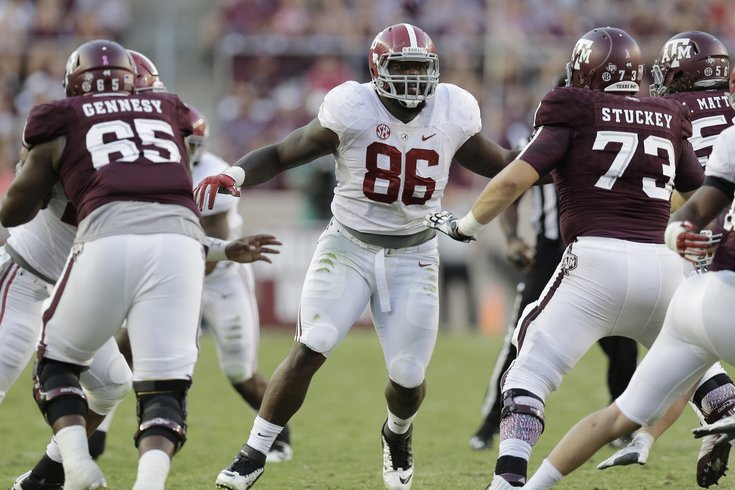 Alabama's A'Shawn Robinson has been linked to the Eagles in mock drafts, but they can wait until the later rounds to add to their DT depth.

Remember the days when the Eagles had a 4-3 defense, and they always loaded up on defensive line talent, even with good players in place? "Fastballs," and whatnot? That's coming back.

One of the most talented and deepest parts of the Eagles' roster is the defensive line, but that doesn't mean the Eagles won't continue to add pieces to it.

This draft is loaded with talent along the defensive line, particularly at defensive tackle. Therefore, there's a good chance the Eagles can wait on adding DL depth, and still take advantage of the surplus of DL talent in this draft by landing one in the middle rounds. Seeing as the defensive line is not an immediate need area, that could be the Eagles' best course.

Here are five defensive tackles competing at the 2016 Combine would might make sense for the Eagles:

Jones was the 20th ranked high school recruit in the country by Rivals.com when he committed to Mississippi State in 2013. Jones is short on production, as he had 99 career tackles, 8.5 sacks, and 18 tackles for loss. He was not the impact player Mississippi State thought they had when they got him to commit. Watching him, there are times when he looks dominant, and there are other times you'll see some really bad moments when he's not hustling to the football.

However, despite that lack of statistical production, Jones is strong, and a very athletic player for his size, with the versatility to play anywhere along the defensive line. There's a very good chance he'll test well at the Combine, and there's an equally good bet some team will fall in love with his measurables. Depending on what the Eagles value, Jones could intrigue the Birds in the third round if he makes it there.

In the Eagles' former 3-4 scheme, Washington would not have been a consideration. However, as a one-gap penetrating DT, he makes sense in an aggressive, attacking 4-3 scheme under Jim Schwartz. Washington's interview process at the Combine will probably be more important than his on-field efforts, as he was arrested for solicitation last December and suspended for the Buckeyes' bowl game. If Washington fell to the fourth round, that would constitute good value.

Ridgeway had six sacks from his interior defensive line spot in 2014, and has talent as a pass rusher. However, he had a variety of injuries in 2015, and had conditioning issues at Texas. If the Eagles think they can motivate Ridgeway and still believe in their sports science program with Chip Kelly gone, Ridgeway could be a steal in the middle rounds if teams pass on him because of those concerns.

Hargrave comes from an FCS school, where he destroyed his smaller school competition this season at his DT spot, racking up 13.5 sacks, 22 tackles for loss, 59 tackles, and two forced fumbles. That came a season after he had 16 sacks and 24 tackles for loss. It really doesn't matter what level you play at -- If you rack up 30 sacks in two seasons from your DT spot, you can get to the quarterback.

Hargrave stood out during the week of Shrine Game practices, and received a late invite during the week of Senior Bowl practices, where he again played well. He moves extraordinarily well for his size at 309 pounds, and could be a quality penetrating one-gap defender in Jim Schwartz's defense if the Eagles can snatch him up in the middle rounds.

It's not often a draft prospect is married with three kids, but that's what Quinton Jefferson's situation is, and he comes with more maturity than most. According to Tony Pauline of DraftInsider.net, Jefferson interviewed well with teams at the Senior Bowl.

As a player, at 6'4, 289, Jefferson is probably a three-technique in a 4-3, but he could also play some DE. During the week of Senior Bowl practices, Jefferson had his moments in which he was a disruptive and able to make plays in the backfield. Jefferson probably isn't going to be a starter in the NFL, but he could fit in nicely with the Eagles as a versatile rotational defensive lineman in the later rounds.