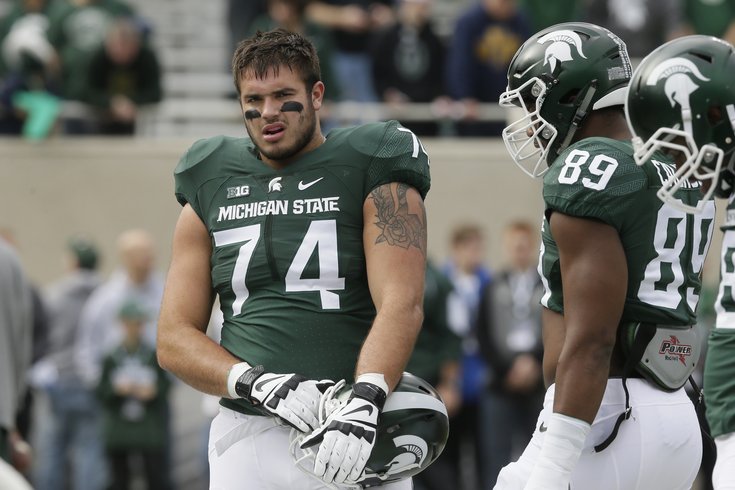 Michigan State OT Jack Conklin has some Jon Runyan nastiness in his game.

The first day of televised Combine workouts won't be for a week and a half, when running backs and offensive linemen will run through their drills on the field at Lucas Oil Stadium in Indianapolis. Yesterday we previewed the running backs; today we'll take a look at some offensive tackles.

The Eagles are the only team in the NFL not to have drafted an offensive lineman over the last two years. That fact is extremely vexing, considering they had the oldest projected starting offensive line in the NFL this time last year.

And so, the Eagles are way overdue for adding young talent along their line, as they were forced to depend on journeymen and untested players to start at both guard spots in 2015, and were empty in terms of depth. They will also need to eventually replace Jason Peters, who just turned 34 in January.

It would appear that the Eagles are trying to buy themselves a year by keeping Peters around through 2016. That will give them time to develop a player to take over at right tackle, with Lane Johnson moving over to LT in the very near future.

Here are five offensive tackles competing at the 2016 Combine would might make sense:

Stanley is one of my favorite prospects in this draft. I watched two of his games last year against two completely different types of edge rushers. The first was against Florida State, when he battled Mario Edwards all day. Edwards goes 6'3, 280, and is a powerful defensive end who was selected 35th overall in the 2015 NFL Draft. Edwards didn't catch a whiff of Notre Dame's QB, and he was moved off the line of scrimmage all day in the run game. The other game was against LSU's Danielle Hunter, who is an athletic freak. Very different type of player, same result.

Stanley is a slam dunk Day 1 starter in the NFL. He is extremely athletic, with very quick feet. It is unlikely he'll fall to the Eagles at 13, but if Philly somehow decides on a franchise quarterback before the draft, I can see them making a modest move up to secure Stanley. Drafting Stanley might tempt the Eagles to just leave Lane Johnson at RT and let Stanley fill in at LT.

Decker played RT for Ohio State as a sophomore and moved to LT last season. In that sense, he could follow in the footsteps of Johnson, who played both RT and LT at Oklahoma. The difference in importance between LT and RT is wildly overrated, as defenses often put their best pass rusher opposite the RT. For example, Von Miller and JJ Watt primarily line up against the RT.

I've had a few people whose opinions I value wonder if Decker is one of the 13 best players in the draft. I think he's right in that ballpark, and if you have to slightly over-draft an offensive tackle, then so be it. As we've found in recent drafts, if you don't, somebody else will, and then you end up not drafting anybody, which leads to an old, thin offensive line much like what the Eagles have now.

Like Taylor Decker above, if you're drafting Conklin, you're going to have to get him in the first round. Conklin isn't as good a pass protector as guys like Laremy Tunsil, Stanley, or Decker, and doesn't have their athleticism. However, he is powerful in the run game, and flat-out nasty, Jon Runyan-style. I do think there is value in being somewhat forgiving of physical ability if a player has a certain ill-tempered attitude.

While I don't think Conklin is worthy of the 13th overall pick, in a trade-back scenario he might make some sense.

Clark had the longest arms at the Senior Bowl, measuring in at 36 1/4" and a wingspan of 85 7/8". He also flashed impressive athletic ability, but he will be a complete projection to the NFL, as he played in Texas Tech's spread offense. I would not want Clark starting for me in 2016, but if you give him a year or two to learn the game at the NFL level, there are going to be coaches around the league who will think they can make him into a Pro Bowl player. If Clark fell into the third round, he would make a lot of sense for the Eagles.

Prediction: Spriggs is going to have an excellent Combine. His athleticism in games is extraordinarily obvious. However, Spriggs had a somewhat disappointing week of Senior Bowl practices, as he was often beaten in pass rush situations by power moves. Like Clark above, Spriggs could use a year with NFL coaches to correct some of his deficiencies before throwing him to the wolves on the edge.