Day 1 NFL Combine preview: OL/TE to watch who could interest the Eagles 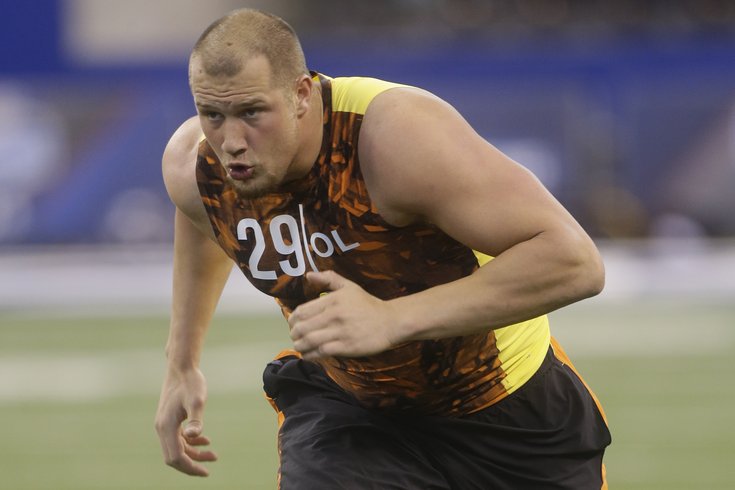 Lane Johnson lit up the Combine in 2013. Will an offensive lineman grab the Eagles' attention in 2015?

The NFL Combine workouts begin today on NFL Network, starting with the offensive linemen and tight ends. If you're such a die hard football fan that you're going to be sitting in front of your TV watching fat guys run 40 yard dashes one after the next, here is a list of players worth keeping an eye on:

• Trent Brown, OT, Florida (6’8, 355): At the Senior Bowl, Brown looked lighter on his feet than you would anticipate for a guy a few donuts shy of 400 pounds (He weighed in at 376 in Mobile). I actually projected Brown to the Eagles in the 7th round of my first mock draft of the offseason:

The Eagles have previously shown that they'll bring in massive offensive linemen with an eye toward grooming them, as evidenced when they made 6'8, 340 pound offensive tackle Michael Bamiro a priority undrafted free agent. Brown isn't a player who is going to help you immediately, but he has upside if the Eagles can develop him.

Brown has since slimmed down to 355, but he's a strong candidate to run the slowest 40 at the Combine.

• AJ Cann, OG, South Carolina (6’4, 313): Considered among the top guards in this class, and the Eagles have an obvious need for youth to fill in behind their two aging guards.

• TJ Clemmings, OT, Pittsburgh (6’5, 309): Clemmings had a disappointing showing at the Senior Bowl, but Tyler Aston of ScoutsNotebook.com thinks he could be a good fit for the Eagles:

Fit with the Eagles: TJ Clemmings is a powerful and athletic blocker who profiles well as a fit for the Eagles. He is a bit raw, having made the switch from defense just two years ago, but has a very high ceiling. He is an ideal candidate to play RG for the Eagles next year and can transition to RT down the line. He will also have to transition from a power run scheme to zone blocking, but seems to be intuitive and has a skill set should ease the transition.

If the Eagles liked him, he’d be an option in the first round.

• La’El Collins, OT, LSU (6’4, 305): Another highly rated OT, likely to go in the first round. Collins said during his Combine interview, "A lot of teams told me that I'm their favorite offensive lineman," via Tony Drovetto of Seahawks.com.

• Cameron Erving, OT/C, Florida State (6’5, 313): Erving was the Seminoles' left tackle who switched to center mid-season, and played well. Versatile, athletic offensive lineman for a team, which again, is desperate for youth and depth.

Fisher is an athletic offensive lineman with experience at LT and RT, but will likely play right tackle in the pros. He is better in the run game than as a pass protector. Jason Peters is a human freak of nature who may be able to play into his 30s longer than a normal professional OT, but the Eagles are going to have to replace him at some point. Is the plan to move Lane Johnson over to LT and fill someone in at RT? If so, Fisher could serve along the Eagles OL as depth in the short term, and the RT of the future in the long term.

• Erick Flowers, OT, Miami (6’6, 329): Another potential first round pick the Eagles could have their eye on.

• DJ Humphries, OT, Florida (6'5, 307): Humphries said he never played above 295 pounds at Florida, and had to learn how to put on healthy weight. He had previously gotten his weight up by drinking Slurpees. The draft advisory board recommended that Humphries "stay in school," but he is now being projected as a high pick.

Arie's brother Cyrus was drafted by the Bills in the second round of the 2013 draft. Both of the Kouandjio brothers were coached by Eagles OL coach Jeff Stoutland, so at a minimum, the Eagles will know everything they need know about him from a #culture perspective. Kouandjio is often a dominant run blocker, but like his brother, comes with some injury concerns.

Also, with Ed Marynowitz having helped build the Crimson Tide’s National Championship teams, we must also extend #DuckBias to…

• Ali Marpet, OG, Hobart (6’4, 307): Marpet was another player who made my first Eagles mock draft of the offseason:

Marpet comes from Division III Hobart, and in Chip Kelly's first two years in Philly, the Eagles have exclusively drafted players from big Division I schools. However, Marpet showed at the Senior Bowl that he belonged, and then some, which Marpet attributed to refined technique not normally associated with smaller schools. He also seemed like a high character kid who will interview well.

• Cedric Ogbuehi, OT, Texas A&M (6’5, 306): And finally, a third player from my initial Eagles mock draft of the offseason. Yes, I had them taking three offensive linemen:

Around this time last year, Ogbuehi was given a first round grade by the draft advisory committee, but he decided to stay in school. Texas A&M has been looooaded with offensive line talent over the last few years. In the 2013 draft, the Jaguars took Luke Joeckel 2nd overall. In 2014, the Falcons drafted Jake Matthews 6th overall. Ogbuehi played guard when Joeckel and Matthews served as the bookends for the Aggies, he moved to RT when Joeckel left for the NFL, and then over to LT when Matthews followed.

Unfortunately, Ogbuehi's season at left tackle didn't go as planned. He struggled at left tackle, before moving back to the right side, and then in the Aggies' bowl game, he tore his ACL. Ogbuehi obviously did not compete at the Senior Bowl, he won't work out at the Combine, and his 2015 season with whatever team drafts him will be in question while he recovers.

For the Eagles' purposes, however, Ogbuehi would make some sense as a "redshirt" draft pick. The Eagles currently have a very good but very old offensive line, and they urgently need to reload with youth in preparation of an imminent decline from their offensive linemen. In other words, unless they surprisingly cut Todd Herremans or trade Evan Mathis, they don't need someone to step in and start immediately. They still have some wiggle room in patiently reloading with youth. Ogbuehi could be a first or second round type of talent who can be had in the third round.

• Corey Robinson, OT, South Carolina (6’7, 324): Personally, I’m not a fan at all of the games I’ve seen of Robinson, but again, as noted under Trent Brown above, the Eagles have experimented with massive bodied offensive linemen.

• Ty Sambrailo, OT/OG, Colorado State (6’6, 311): Played OT in college, but many believe he'll transition to guard in the pros, which again, makes him the type of versatile offensive lineman the Eagles could use. Possible top 50 pick.

• Brandon Scherff, OT/OG, Iowa (6’5, 319): Potential high first round pick. Unlikely to fall to the Eagles at 20, but if he did, you’re possibly looking at a Day 1 starter at guard who could eventually kick out to right tackle. Every year, FOX Sports' Bruce Feldman lists his "Top 20 freaks" in college football. Scherff came in at #2:

The latest in Kirk Ferentz's terrific pipeline of elite O-linemen, Scherff is a 6-5, 325-pound left tackle with an uncanny knack for excelling in pretty much everything he attempts. According to Hawkeyes staff, Iowa began heavily recruiting Scherff when he was a 280-pound quarterback. He also, despite his enormous size, was a standout pitcher who threw in the mid-80s and had a nasty breaking ball; a basketball player, who averaged a double-double; and a varsity letter-winning tennis player, in addition to being a state champion shot putter. But Scherff isn't just one of those rare athletes who has the dexterity to excel at everything he does -- he also has the freak-wiring in his genes as well.

Chris Doyle, Iowa's strength coach the past 16 seasons, has worked with everyone from Hawkeye first-round linemen Robert Gallery and Bryan Bulaga to three-time All-Pro Marshal Yanda. "In terms of pure explosiveness, (Scherff) is the best we've ever had," Doyle said. "He's in a league of his own." That really is a mouthful, when you consider that Gallery ran in the 4.8s at the combine and vertical jumped 30 inches despite weighing 323 pounds before becoming the second overall pick in 2004.

• Laken Tomlinson, OG, Duke (6’3, 323): Big bodied OG who impressed against Washington’s Danny Shelton at the Senior Bowl. Tomlinson is very cerebral, and could be the "wow Chip Kelly during his interview" guy this year.

• Busta Anderson, TE/WR, South Carolina (6'5, 244): Anderson may be more useful to the Eagles on the outside playing wide receiver, but he's a hybrid type that Chip Kelly could use creatively. Averaged 15.6 yards per catch for his college career on 61 catches.

And hello? His name is Busta.

• Nick Boyle, TE, Delaware (6'4, 268): Boyle struggled early at the Senior Bowl, but finished strong. We covered him at length in our TE offseason preview:

Boyle is a very under-the-radar prospect out of Delaware who was a versatile player for the Blue Hens, lining up out wide, as an in-line TE, and even occasionally in the backfield next to the QB. He also has the ability to long snap. At 6'5, 273, Boyle is big, versatile, and the type of player who could fit into Chip Kelly's offense.

• Clive Walford, TE, Miami (6'4, 251): Clearly separated himself from the pack of tight ends at the Senior Bowl.

• Maxx Williams, TE, Minnesota (6'4, 249): Only worth noting because he's the consensus top TE in this draft class. However, the Eagles would really have to like him to consider drafting a player at a position in the first round where they're already very strong.