What they're saying: Eagles trade speculation

A few days ago, Manish Mehta of the New York Daily News laid out a reasonable trade scenario between the Eagles and Jets, in which the Eagles would acquire Oregon's Marcus Mariota. Here's the scenario Mehta proposed:

“If he’s in Chip’s system, he’ll be a problem for teams from Day One,” one personnel director said. “Mariota may be the missing piece for them. If he plays in any other system, he’s at least one year away.”

The Jets would get a much-needed upgrade from Geno Smith and four premium picks over the next two years to help re-shape their roster.

So in chart form, here's what Mehta is speculating:

Mehta wasn't the first, and he certainly won't be the last to come up an Eagles-Mariota trade scenario. A look at some others:

In October, not even halfway into the season, ESPN layed out a draft scenario in which the Eagles could land Mariota when it looked like the Raiders might have the #1 overall pick:

That was pure nonsense. I'm not sure who'd trade all that much for a soon-to-be free agent in Brandon Graham, or a running back coming off a down season with a huge cap number, much less give up the #1 overall pick for them. Not even the Raiders.

And then there was this mock draft scenario by SB Nation, in which the Eagles trade their entire draft plus their 1st round pick in 2016 to the Titans for the 2nd overall pick. In chart form: 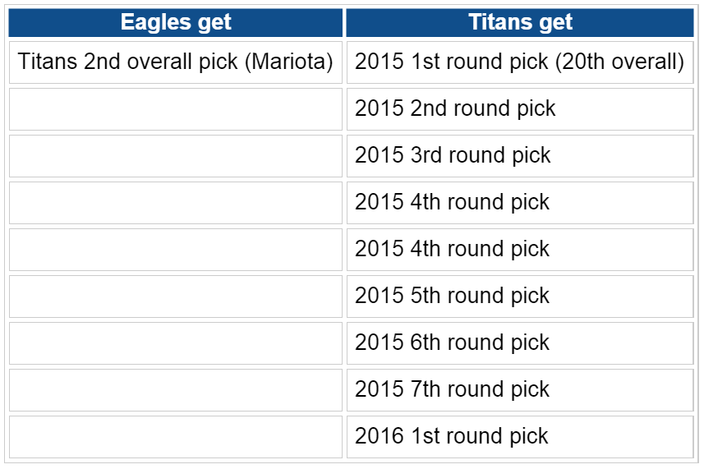 70 days until the draft.