Fantasy football: How serious are injuries to Saquon Barkley, Michael Thomas, A.J. Brown and others? 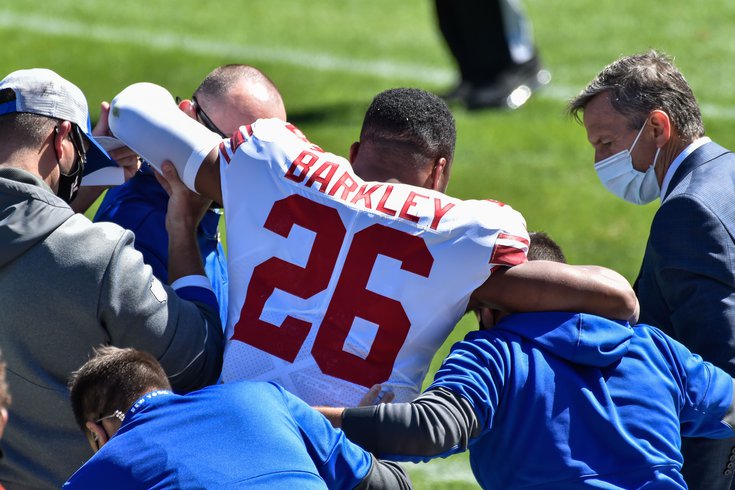 Training camp will be in full swing for all 32 NFL teams this upcoming week, and fantasy football enthusiasts will no doubt come across news of some of the top projected skill players starting the season on the PUP (physically unable to perform) list, or worse.

Which of these big name players' ailments are worth being concerned about? Which ones could linger into the regular season and therefore impact their draft stock?

While it's entirely too early to make any of those kinds of determinations about a month and a half out from meaningful games kicking off, it's important for serious fantasy football players to be aware of the developments of these top players.

With many drafts set to take place in a month or less, and dynasty leagues already starting to have offseason activities, lets take a look at some NFL fantasy-relevant injuries to keep an eye on:

As many people already know, Akers is done for the year after tearing his ACL while training to get in shape for the season. Akers had a pretty good rookie year and had keeper potential, so his injury has already impacted fantasy owners. Darrel Henderson immediately becomes more valuable, and with no true No. 2 behind him on the roster, many expect the Rams to sign a free agent who could get regular season reps. Keep an eye on the RB situation in L.A.

Barkley is still a top 5 pick, as he rehabs from his ACL injury a year ago, but he is starting the year on the PUP list and will not be practicing for the foreseeable future. This is a smart move by the Giants, as there is no reason to rush his return. Knowing Barkley, he should be ready to play in Week 1 barring a setback but there is some obvious risk to drafting him.

Another star player coming off a season-ending injury from 2020, Prescott is reportedly going to be ready to go come the preseason and should be good to go for the regular season.

Brown, who had injuries to both knees last season and got pretty banged up, will not start the year on the PUP list, the Titans decided and that's great news. He hasn't suited up to practice at all this offseason but it appears he'll be practicing with his teammates in training camp.

From good news on a stud wideout to bad news, Thomas — whose draft stock has already fallen due to the retirement of his former QB Drew Brees — had ankle surgery in June and will not be ready to go when the season starts in September. He's a draft and stash guy for later in the year.

Nursing a knee injury that cost him the end of 2020, there seems to be optimism that OBJ will be ready to participate in training camp this coming week. There is a good chance he is ready to go in Week 1.

Cooper will begin the year on the PUP list as he works his way back from a nagging ankle injury. Reports from Dallas say there is no serious concern, and he should shed this designation at some point this summer.

A hamstring injury sustained in June has been bothering Smith, but aside from being limited to start his training camp it doesn't look like he's expected to miss time.

A groin injury kept Aiyuk sidelined from OTAs, and he's someone worth watching as he starts training camp.

Moss had offseason ankle surgery that kept him out of OTAs, but the expectation is that he'll be full go in training camp.

First round pick Toney was added to the COVID list by the Giants.

A foot injury that was previously undisclosed will keep Rudolph sidelined for a while, as he'll start the year on the PUP list.

The fourth round pick will be a popular sleeper choice, as he tries to carve out a role in the New England backfield but a non-football injury will slow him down, reports say.

A knee injury will cost the Niners back up at least six weeks.