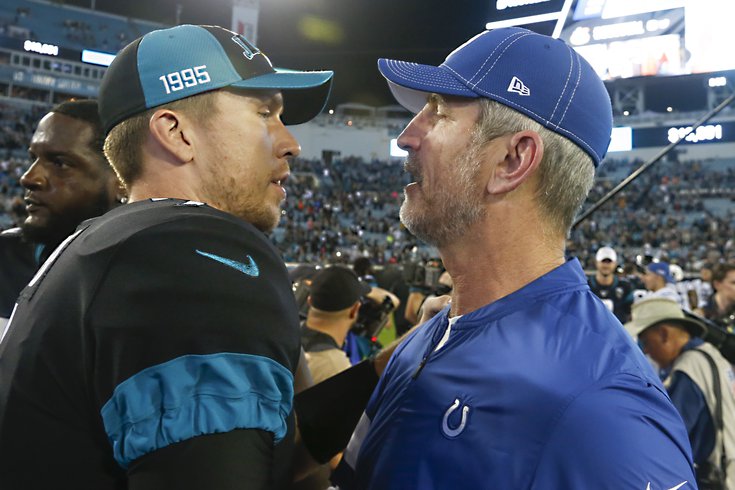 The most important athlete in the history of Philadelphia sports is in the news. Super Bowl LII MVP Nick Foles, who spent 2020 and 2021 with the Bears, may be close to joining the Colts, per The Athletic's Zak Keefer:

Colts are working to add veteran QB Nick Foles, sources said. Nothing done yet, but there’s a chance it comes by next week. Makes a ton of sense on both sides. He’d backup new starter Matt Ryan.

Foles heading to Indianapolis would reunite him with Colts head coach Frank Reich, who served as the Eagles' offensive coordinator during Foles' magical Super Bowl run during the 2017 season. Reich, along with former Eagles head coach and play-caller Doug Pederson, unlocked Foles and had him going Super Saiyan mode against the Vikings and Patriots. If Foles is going to catch on elsewhere as a backup in the NFL, a reunion with Reich makes all the sense in the world.

While Foles would be brought in to be the No. 2 QB to the newly acquired Matt Ryan, the elephant in the room is that Foles would be walking into the Colts' locker room after the Carson Wentz era ended on such rocky terms at the conclusion of the 2021 season. Those two will forever be intertwined, huh?

When there was concern that Wentz could miss time with an injury during the lead-up to the 2021 season, chatter swirled that the Colts could (and should) make a move for Foles given his familiarity with Reich's offensive system. Despite still being on the Bears, albeit buried on the QB depth chart, Foles spoke candidly about his connection with Reich:

Foles indicated in an earlier question he would want to go to an offense he’s familiar with, if traded. Doesn’t take a rocket scientist to connect the dots from there. pic.twitter.com/waWzCp7VTr

Again, Ryan is Indy's starter, but anything can happen during the course of an NFL season, as Eagles know all too well with the Foles saga in 2017 and 2018. The Eagles are slated to go to Indianapolis to face the Colts in Week 11 on November 20.
UPDATE [May 23, 12:34 p.m.]
It's official. Nick Foles is Matt Ryan's new backup QB:

Nick Foles and the #Colts have now agreed to terms on a two-year deal, source says. Foles and Frank Reich officially reunited, this time with Foles as Matt Ryan’s backup.

The saga of Nicky Foles rambles on.