The 41-year old will join the startup league for its regular season finale next weekend, according to a report 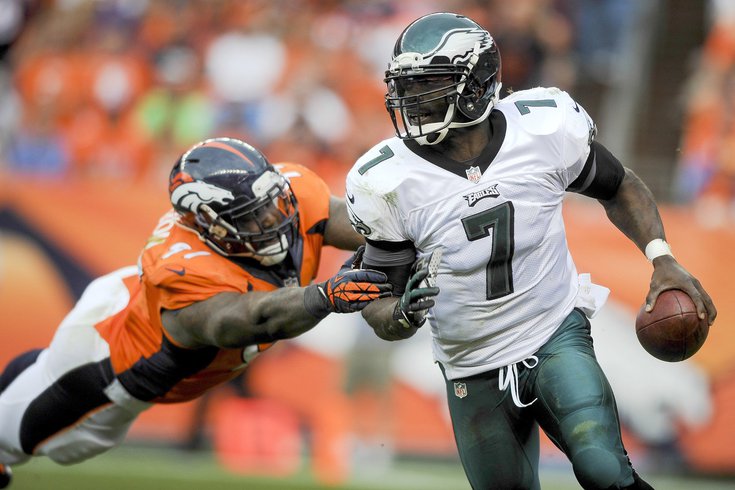 Michael Vick is coming out of retirement.

The former Eagles QB will be joining Fan Controlled Football for the final day of its regular season on May 28, reports Reuters, with an official announcement expected sometime next week.

FCF is a startup 7-on-7 indoor league that began play in early 2021 and operates on an almost video game-like rule set where fans collectively vote on the plays while games are broadcast over online platforms like Twitch and Peacock.

The league initially drew interest when it brought Johnny Manziel — the former star Texas A&M QB who flamed out in the NFL quick — into the fold, then made an even bigger splash this season when Hall of Fame receiver Terrell Owens, who never officially retired from the NFL, joined the fray and showed he's still got something left even at 48 years old.

According to a source in the Reuters report, Vick, 41, agreed to come back because of the success he saw Owens having, though it isn't clear what team Vick will be joining or if this possible curtain call will go beyond just the regular-season finale.

FCF is based in Atlanta, and it was with the Falcons where Vick became an NFL superstar after being taken first overall in the 2001 NFL Draft. He had unreal speed and, as a lefty, an absolute cannon of an arm, earning himself three Pro Bowl selections and becoming the first quarterback to rush for 1,000 yards in a single season.

But in 2007, Vick's career was out the window. He was suspended by the NFL then federally indicted for his involvement in an illegal dogfighting ring. He plead guilty and served nearly two years in prison.

Vick was released in 2009 and talk of an NFL return was on the table, but he was a highly controversial figure. Andy Reid, with Donovan McNabb's encouragement, took a flier on Vick with a one-year contract offer in the preseason, and he spent the year as McNabb's backup. The fanbase was, and would remain, split on Vick's place on the roster because of the dogfighting charges.

In 2010, after McNabb was traded to Washington and his original successor in Kevin Kolb went down in Week 1 with a concussion, Vick took over as the starter. He threw for more than 3,000 yards and 21 touchdowns, ran for nearly 700 and nine more TDs, and sparked a campaign that saw the Eagles to the playoffs, awarded Vick as the league's Comeback Player of the year, and included a 59-28 drubbing of Washington on Monday Football. (Here's the link, NFL fix your YouTube policy.)

The run wouldn't last. The infamous "Dream Team" happened the season after, the Eagles bottomed out and Andy Reid was fired in 2012, then Chip Kelly was hired and Nick Foles' emergence led the Eagles to move on.

Vick hung around for two more seasons with the Jets and the Steelers before going unsigned in 2016 then retiring in 2017.

It's been nearly seven years since Vick last suited up, but we'll see what this potential FCF curtain call brings.

Michael Vick still got it 🔥