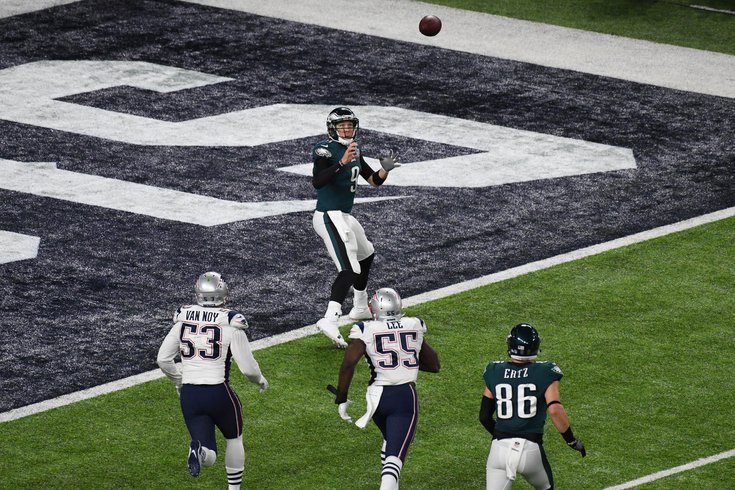 It's hard to imagine that three years have passed since Nick Foles and the Eagles stunned the New England Patriots in Super Bowl LII, bringing Philadelphia its first Lombardi Trophy in a thrilling 41-33 victory.

Tom Brady will be back in the Super Bowl with the Tampa Bay Buccaneers on Sunday, so some things never change.

But for Eagles fans, a little trip down memory lane once a year can't hurt.

Foles, now with the Chicago Bears, will forever be remembered for the Philly Special, the fourth-and-goal gamble that gave the Eagles a more comfortable lead at the end of the first half.

The play has been dissected and discussed from every angle ever since, but this week Foles revealed some more insight into his mindset and the playcall. On his "Mission of Truth" podcast with former Eagle Chris Maragos, Foles brought on former teammate Trey Burton, who through the pass during the trick play, as a guest to revisit the Super Bowl and the Philly Special in particular.

We're BACK! We released an awesome episode today as Chris and Nick talk to tight end @TreyBurton8 and share Super Bowl memories from 3 years ago and the real story behind "The Philly Special."@ChrisMaragos @NickFoles https://t.co/6UXsIr4Dfz pic.twitter.com/EeyQbTDZcp

It's been reported before that the Eagles ran the Philly Special a handful of times at practice in the weeks leading up to the Super Bowl. It looked sloppy in practice, even though Burton and Foles were able to connect on the toss. Maragos recalled turning to Malcolm Jenkins during one practice and telling him he thought the play would never work.

"My acting job was bad," Foles said to Maragos and Burton on the podcast. "I had to sell that I was bringing the back behind me, that I'm audibling the play, I'm going over Lane (Johnson). Like, there was a couple things and I'm like, man, I've got to be an actor in a football game. That was the problem. I don't think it was ever you throwing and me catching, that's the easy thing. It was actually getting to the point where we're deceiving the defense that made it work."

In fact, the Eagles were thinking about running a different play on fourth and goal before the timeout.

"We were going to run Speed O Left on 4th and 1, and I think when we called that play and then we called timeout, my gut went, hey, it's Philly Special time, let's roll," Foles said. "If we're wanting to do the Speed O play, man, let's just run the Philly Special, because Speed O's just a speed option."

With the speed option, Foles would have darted out with a running back available for a pitch. But Foles said the play had also been a disaster in practice and resulted in a fumble return for a touchdown.

That's what led to the famous clip of Foles asking Doug Pederson if he wanted to run "Philly Philly."

"I'm like, 'Oh no, I can run this little speed option, but I'm probably not going to be keeping it,'" Foles said. "So I ran over to Doug and asked him."

Foles also added that the team came very close to running the Philly Special during the NFC Championship game against the Minnesota Vikings, but elected not to because they had a safe lead and Foles' ribs were in bad shape.

Eagles fans know how iconic and pivotal the Philly Special has become in the history of the organization and Philly sports, but to hear Foles explain its impact on him personally just raises it to another level.

"I've signed more autographs of me catching a football than throwing it," Foles said.