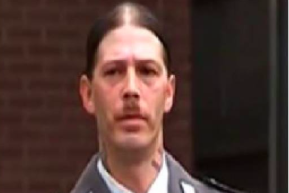 A New Jersey fugitive who gained notoriety in 2008 over a birthday cake for his 3-year-old son, Adolf Hitler, was arrested Thursday in Pennsylvania on charges of domestic violence.

Isadore Heath Campbell, 42, surrendered to police in Shippensburg on Thursday and will be held pending extradition to New Jersey, according to a statement from the Holland Township Police Department.

The domestic violence charge stems from an alleged incident in October, said Holland Police Chief John Harris, who warned Campbell of the warrant before he fled New Jersey.

In 2008, Campbell's wife, Deborah, ordered a custom birthday cake for her son Adolf and requested that ShopRite include the name shared by the Nazi figurehead in icing. When ShopRite refused, the story went viral and Campbell turned to a Pennsylvania Walmart to do the job. At the time, he offered a puzzling response to public outrage over the names of his children, including Eva Braun and JoyceLynn Aryan Nation.

"I think people need to take their heads out of the cloud they've been in and start focusing on the future and not on the past," Campbell told NJ Advance Media in 2008. "There's a new president and he says it's time for a change; well, then it's time for a change," he continued. "They need to accept a name. A name's a name. The kid isn't going to grow up and do what (Hitler) did."

After the cake incident, three of Campbell's children were taken into state custody in 2009 and held following several appeals in New Jersey's family court system. in 2014, Deborah Campbell was charged with aggravated assault in a fight with Heath's new girlfriend, Bethanie Zito, with whom he had his ninth child, Eva Braun. The girl was taken into protective custody shortly after her birth.

Campbell has also been known to regularly appear in public wearing Nazi regalia.

Details about the alleged domestic violence incident were not revealed by the Holland Police Department.