Jay and Meagan Bradford, recently married, get Christmas miracle with help of a salvage diver 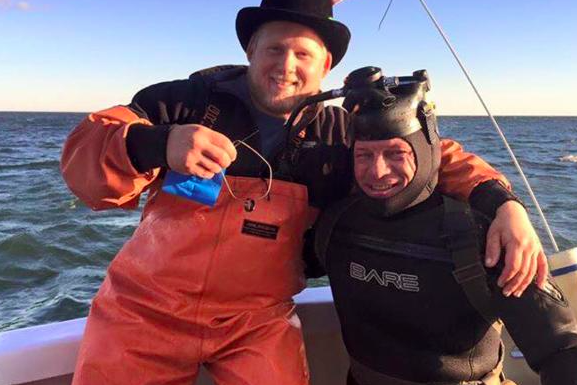 Jay Bradford, 27, of Point Pleasant, poses with the wedding ring recovered from the ocean by salvage diver Mark Thompson.

Against all odds, a New Jersey man recovered his wedding ring this week after losing it as he pulled an anchor back on board the Lock-N-Load charter boat during a fishing trip.

On December 12, 27-year-old Jay Bradford was accompanying Captain Nick Barsa as first mate on a charter fishing trip in the Atlantic Ocean off the Belmar coast. Toward the end of a slow day that didn't yield much in the way of blackfish, Barsa sent Bradford to lift the anchors and move on to one more location, the Asbury Park Press reports.

"My hand hit the bow rail and the ring came up off my knuckle. The ring slid off, hit the tow rail and went into the water," said Bradford, a resident of Point Pleasant.

Bradford, who had just gotten married to his wife Meagan in June, was devastated. He sent her a text message saying his day took a bad turn. When she responded with encouragement about the fish eventually biting, he replied: "It's not the fishing, I lost my ring in the water."

Barsa called up his friend Mark Thompson, a diver and owner of Sea Bright's Dive and Salvage. Meanwhile, he marked the exact coordinates where the tungsten ring was lost on his boat's GPS. On December 16, Barsa, Thompson and Bradford set out to recover the ring from a rock bed 33 feet deep off the coast of Long Branch.

Despite strong winds and poor visibility underwater, Thompson's reputation as a salvage diver, recovering everything from cell phones to watches, gave him plenty of confidence.

Using an underwater lamp, Thompson was able to find the ring in an astonishing 10 minutes, giving the Bradfords an unlikely Christmas miracle.

Going forward, Bradford says he'll probably stop wearing the ring out on fishing trips and opt instead for a cheap metal band.