Relationship came to light after Dawson 'got TMZ'd' 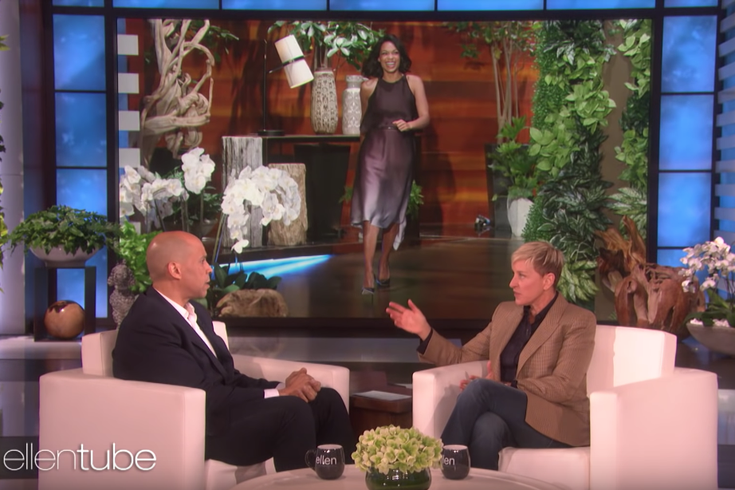 New Jersey Sen. Cory Booker appeared on "The Ellen DeGeneres Show" Wednesday afternoon. Amid their discussion on politics and Booker's run for president in 2020, the two discussed the new love of his life, Rosario Dawson.

Dawson confirmed the two were dating earlier this week on Monday. DeGeneres notes that the two were trying to keep the relationship private, but Booker says, “She got TMZ’d.”

He adds, “She was visiting me in D.C., and she left for the airport, and she got ambushed at the airport. I suddenly get this little video from her [saying] that ‘I got TMZ’d.’”

But the senator notes that her confirmation of their relationship “was wonderful. She’s just an incredible human being.”

As DeGeneres discusses the difficulty of their relationship now being brought under a microscope, the presidential hopeful acknowledged the difficulties, but says she inspires him. “She’s just a deeply soulful person and has taught me a lot of lessons about love already, and sometimes you show the greatest strength when you make yourself vulnerable.”

But the glow doesn't end there, he adds, “She really has this nurturing spirit that’s made me more courageous, not just in the love that I project and want to see in our country, but even in our personal relationships, to love more fearlessly."

Ellen then tries to convince Booker to hold off on the wedding until 2021, so he can have the wedding at the White House. "If you go in single, and then you have a wedding in the White House - I mean, we would watch. That would be like our Royal Wedding."