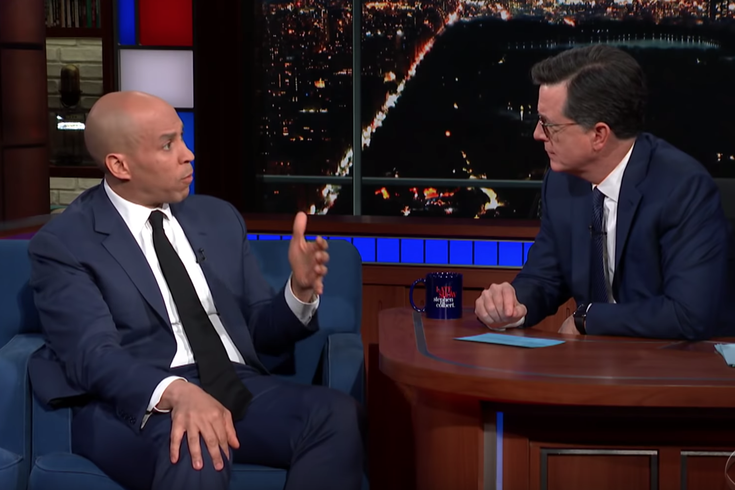 Cory Booker, making his case on the Late Show.

New Jersey Senator and 2020 Democratic candidate Cory Booker appeared on “The Late Show with Stephen Colbert” on Friday, after another busy week in which President Trump’s campaign manager Paul Manafort was sentenced to 47 months in prison for operating a years-long, multimillion-dollar fraud scheme.

Booker took the opportunity on Colbert’s show to talk about something he has in common with Philly rapper and activist Meek Mill: a general displeasure with the United States criminal justice system.

Booker said he wasn’t shocked by Manafort receiving such a relatively lax sentence.

“That so delegitimizes our criminal justice system,” he continued. “I had a guy with me at the State of the Union address who, through legislation I worked on with other legislators, was liberated. He was in jail for life for selling, for being in possession of crack cocaine weighing less than a baseball. Less than a baseball, a life sentence.

"And here is a guy [Manafort] who betrayed our nation, that the prosecutors and that the sentencing guidelines said over 19 years, and he’s getting out with a slap on the wrist.”

You can watch the full segment here:

Booker also discussed his problems with the system at large, outside of the Manafort case:

“One of my friends says we have a criminal justice system that treats you better if you’re rich and guilty than if you’re poor and innocent. And there are people from neighborhoods like mine in America, who get convictions for doing things two of the last three presidents admitted too doing. We are a nation that churns into our criminal justice system the most vulnerable people.

"You can tell a lot about a country by who they incarcerate. In Russia, they target political opposition. In Turkey, they’re actually incarcerating the media. [To Colbert], so be careful when you travel there, sir. [Laugh]. But in our country, we prey on the most vulnerable people: poor folks, mentally ill folks, addicted folks, and overwhelmingly black and brown folks.”

Booker was raised in the affluent Harrington Park neighborhood of New Jersey, but he served as mayor of Newark from 2006 to 2013, a city with disproportionately low median household income and high minority population.