"I wake up every day fearing going back to jail." 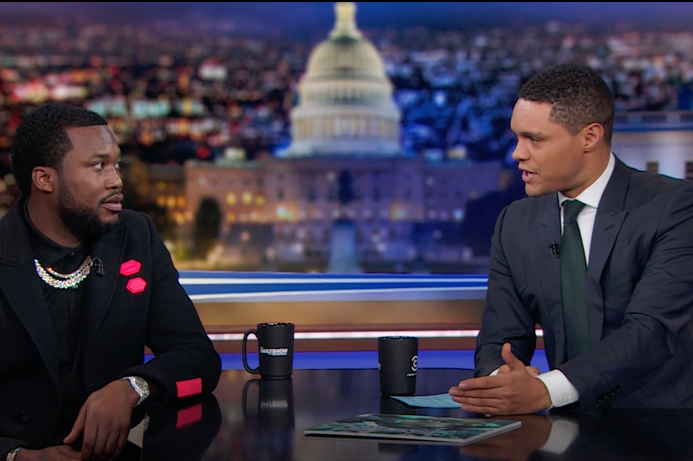 Meek Mill appeared on "The Daily Show" with Trevor Noah Tuesday night and discussed criminal justice reform, his time in prison and his new album, "Championships."

Mill spoke candidly about his experience in prison and how the system has not only affected him but people across the country.

“Yeah, I wake up every day fearing going back to jail," Mill said.

Mill spoke of the injustices in the system, how many people have been falsely accused on charges that will eventually follow them throughout their lives, hindering their abilities to attain jobs and live normal lives.

The "Daily Show" host refers to "Championships" as one of the most gripping albums he's heard due to its frank commentary on Mill's experiences in prison. The album explores prisoner treatment, from hearing screams of rape to how the guards treated prisoners - and in turn, Noah notes, reminds the listener that prisoners are human.

In regards to making new music while in prison, Noah asks Mill, "Where do you find your joy?"

Mill responds, "I never wrote a song in prison. I was so depressed and stressed out." Adding, "A lot of people hear rap music and sometimes you hear people talk about violence, drugs, and things like that. We actually grew up in these environments our whole lives.”

He continues, “I just want to deliver my message in a way where all of American can view and see where we’re coming from.”

Mill's "Championships" debuted at no. 1, selling 229,000 units in its first week. Billboard and Neilson were late to deliver the news on his album, however. Due to technical issues, Billboard released its full chart of 200 albums later than usual, citing a "processing discrepancy" on part of Neilson.