Oh, and did we forget to mention the pop superstar was in New Jersey this past weekend?! 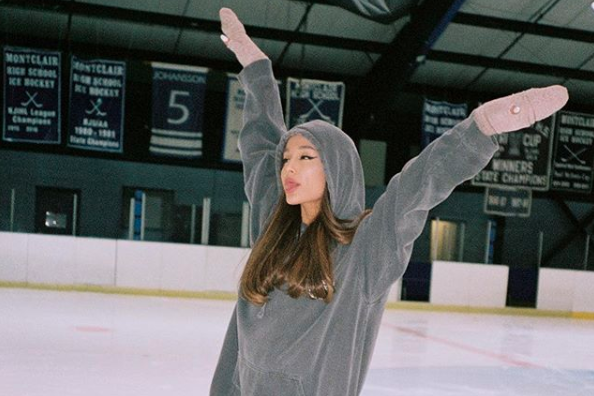 Ariana Grande rented out Clary Anderson Arena this past weekend to go ice skating with friends.

Ariana Grande put out some big news on social media this week.

First thing's first, Grande announced she would be dropping another single on Thursday night called "Imagine."

Yes, you read that right. All of this WHILE Grande was nominated for two Grammys for the August-released "Sweetener" album, "Thank U, Next" spent four weeks at No. 1 on the Hot 100, the 2000s-themed music video for the song broke the Internet, and she was named Billboard Woman of the Year. Oh, and she's going on tour in March.

Anyways, Grande announced via Twitter she would drop "Imagine" on Thursday night to the thunderous applause of her steadfast fan base.

Grande has been teasing this new album, which will most likely be called "Thank U, Next" for a couple of weeks now.

i know. but i think the song i’d like you to hear next is ‘Imagine’. not sure when but that’s what i’m thinkin. https://t.co/vbFcPZVMFD

but yea i’m v excited for dis next one too

tell me how good it feels to be needed pic.twitter.com/myoGc788uV

The second important piece of social media news we have is that the pop singer was in New Jersey at the Clary Anderson Arena in Montclair this past weekend to ice skate. NJ.com reported Grande shut down the rink for an hour-and-a-half skate with her friends on Saturday night.

But on Tuesday evening, Grande put up an Instagram of her skating with Montclair High School banners hanging in the background, which tipped off fans who apparently showed up at the rink, thinking she was there.

Needless to say, New Jersey fans were mad they missed her.

for anyone who cares (probably none of you) but as some of you may know I LOVE @ArianaGrande and I attend graduate school in Montclair so being that I was in Montclair today w/o knowing she was there I would like this time to say WTF. please respect my privacy at this time.

Ariana Grande was in Montclair Highschool yesterday? And none of y’all pieces of shit told me? It’s cool bro I’ll never find love.

@ArianaGrande actually crazy, you were in montclair at clary anderson not even a block away from my high school, sad i missed u tho 🥺 pic.twitter.com/UZ5utbqWtg