One fatality in accident that shut down New Jersey Turnpike 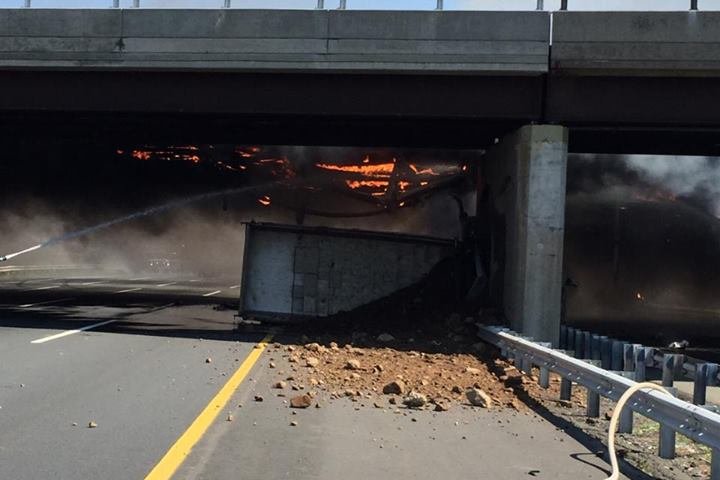 A dump truck became engulfed in flames Monday, forcing the New Jersey Turnpike to shut down.

One person died and traffic continues to be impacted after a dump truck struck an overpass and was engulfed in flames Tuesday morning on the New Jersey Turnpike.

New Jersey State Police confirmed one fatality from the accident. The identity of the victim has not yet been released as authorities are waiting until next of kin is notified.

The southbound lanes of the Turnpike near Exit 13A in Linden are shut down. The Associated Press reports that the lanes are expected to remain closed until early Tuesday night and that major delays should continue.

CBS New York reports that the accident happened around 10:30 a.m. According to the New Jersey State Police, power and gas were cut off around the area of the overpass so crews could assess the damage.

Traffic is being diverted off the Turnpike. After the crash occurred, the Turnpike was shut down in both directions, bringing traffic to a standstill. Sometime after 1 p.m., the northbound outer lanes were reopened.

Northbound outer roadway at the scene of the Turnpike crash just opened! Relief is in sight.

Dan Reiman, mayor of Carteret, New Jersey, tweeted that drivers should expect major delays coming off Exit 12 on the Turnpike in the wake of the incident.

We anticipate increased traffic from vehicles exiting Exit 12 in an attempt to find an alternate route to their destination. #NJTurnpike

The traffic standstill forced drivers to find ways to pass the time, such as playing a game of kickball.

Literally a group of kids playing ball on the new Jersey turnpike pic.twitter.com/f6bXVfbNk8