No Mercy preview: Cena goes for No. 16; is this Ziggler’s last stand? 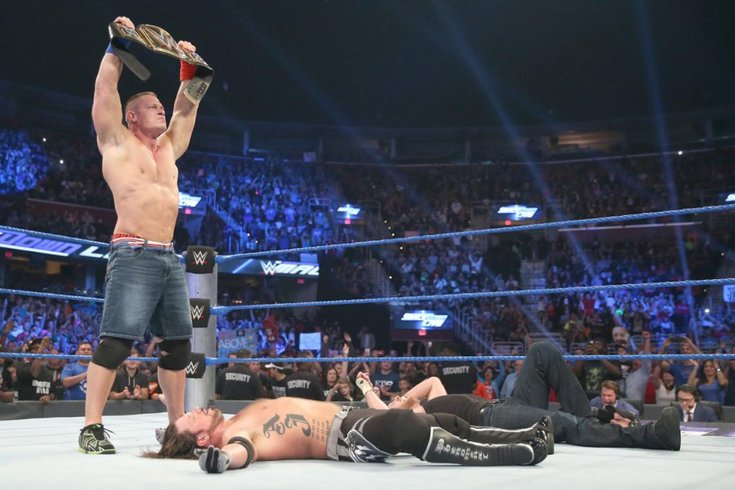 WWE’s SmackDown brand will present No Mercy this Sunday night from the Golden 1 Center in Sacramento, Calif. The brand’s four championships will all be on the line and the main stories being AJ Styles defending his title in a Triple Threat Match and Dolph Ziggler trying to prolong his WWE career in a match for the Intercontinental Championship.

Curt Hawkins will also be making his SmackDown debut, but his opponent is currently unknown as of this writing, so I won’t be previewing his match. He’ll likely win, though. In fact, his opponent will probably be James Ellsworth.

SmackDown has been great television in terms of a pro wrestling show, so I expect this pay-per-view to deliver. With eight matches on the card that all make sense and have good storylines behind them, I have a good feeling about this one.

Here’s how I think No Mercy will play out on Sunday night:

Following Jack Swagger’s surprising victory over Baron Corbin on Tuesday night, one would figure Corbin would get his win back in this match. But, WWE never ceases to amaze me, so I wouldn’t be shocked at all if Swagger won again. Corbin’s been hot as of late, so I hope they make the right decision and have him win. A few matches between these guys isn’t the most terrible thing in the world. I could go for a rubber match on next week’s SmackDown.

Randy Orton is finally cleared to return to the ring, even though he was beaten again by Brock Lesnar on September 24 in Chicago. But Orton will finally step in the ring with Bray Wyatt on Sunday night as this feud has been picking up steam ever since after SummerSlam. Wyatt has targeted Orton because he feels like he’s the real predator.

Orton and Wyatt were set to do battle at Backlash in September, but Orton wasn’t yet cleared by doctors to compete, so Wyatt attacked him in storyline as an excuse to delay the match. Orton still has that big star power aura about him, but this match needs to be won by Wyatt. He needs it way more than Orton. Yes, Orton was beaten twice by Lesnar. But that’s actually more impressive than winning a match at this point. He doesn’t need the win.

Will Orton eventually get a win in this feud? Yes. And while I think Wyatt deserves to get a big win, because he’s lacked that for the last few years, I imagine Orton’s stardom trumps everything for WWE. They already fed him to Lesnar. They won’t do the same for Wyatt.

However, I think Wyatt comes away with a victory on Sunday night because of how the SmackDown segment between him and Orton ended on Tuesday. Orton locked him in a storage bin, essentially, and Wyatt was gone when Orton opened the door. Wyatt reached out for Sister Abigail moments before that, then vanished.

I think we’ll see something big come into play during this match to give Wyatt a victory. It’s how WWE will follow that up that remains the big question for Wyatt and his future.

The SmackDown creative team has done a great job in building Carmella after he lackluster start on the main roster this summer. She attacked a returning Nikki Bella and has really come into her own. While people may still see her as a castoff of Enzo Amore and Big Cass, she’s been doing fairly well on her own since her heel turn.

This feud has been built well and makes sense. Bella wants to gain revenge on the newcomer who will stop at nothing to take down the once longest reigning Divas champion. It’s a great way to have Bella put over stars for the future, but I’m never completely sold on new talents because WWE generally doesn’t allow talent to get over by winning matches. They truly believe wins and losses don’t matter. And while that may be true in their eyes, the audience does care about wins and losses. How big a percentage? That’s an entirely different question.

Carmella needs a big pay-per-view win and the best chance for her to take advantage of her rising stock is to get a victory over Bella Sunday night. It wouldn’t surprise me to see Bella get the win, but Carmella needs to continue to gain momentum heading into the end of the calendar year.

Heath Slater/Rhyno © vs. The Usos

The Usos’ new attitude and heelish tendencies are really working for them. I’ve been impressed the last few weeks watching them work as heels, which has been way better than them working as babyfaces. After finally turning full-fledged heel against American Alpha in September, Jimmy and Jey are poised to win the SmackDown Tag Team Titles and continue their feud with American Alpha. That’ll be a good one.

But where do Heath Slater and Rhyno go from here? It seems like they don’t need the tag team titles anymore, and WWE can do a few things to keep them relevant. The Usos and American Alpha is a money feud and it needs to be for the titles. I’m not feeling a breakup between Slater and Rhyno yet because they work so well together, but I don’t think they need the titles at this point.

Of course, I’m of the opinion titles still matter in WWE today even though people in the company may not agree with that.

Alexa Bliss has really taken the next step [along with Carmella] in the SmackDown women’s division and her angle with Becky Lynch has been highly entertaining. It makes sense, it’s easy to follow and Lynch will likely get a big win in retaliation for Bliss’ attacks on her recently.

This seems more like an old school type of professional wrestling feud, and I’m absolutely okay with that. Those are usually what make the best angles. Lynch and Bliss have killed it on the mic and have made this match one of the ones I’m looking forward to the most this Sunday. I think the champion retains.

Ever since the brand extension, Dolph Ziggler has taken the next step on the mic. His promos have been a thousand times better than before the extension, and the angles he’s been involved in have really played out well on television. From his feud with Dean Ambrose to The Miz, Ziggler’s passion shines through his ring work and mic work.

Sadly, this might be the end of the road for him.

Ziggler is putting his career on the line against Miz’s Intercontinental Championship on Sunday night. Even though WWE doesn’t think titles matter, Ziggler’s passion for the Intercontinental title proves that when wrestlers have something to fight for, it makes it that much more important. And now, Ziggler’s fighting for his own career.

It’s clear Ziggler’s time is probably in the rear-view mirror in WWE, so this is a great way for him to go out. I expect him to come close to winning the title, but Miz will eventually retain his title and we’ll be saying goodbye to Ziggler.

The build for this Triple Threat Match has been outstanding throughout the last few weeks. Each individual has gotten their licks in, and there’s not one favorite to walk away Sunday night with the championship. Of course, I don’t think Styles loses the title just one month after he won it, but stranger things have happened in the world of professional wrestling, especially in 2016.

Dean Ambrose is trying to reclaim the title he won in June after cashing in his Money in the Bank briefcase and pinning Seth Rollins moments after he pinned Roman Reigns. Ambrose was an interesting champion, and his feud with Ziggler didn’t light the world on fire. His war of words with Cena might be the most interesting give-and-take in this three-way feud, given that they’ve both talked about not respecting each other for their own reasons.

It looks like this match could produce a feud between Cena and Ambrose on its own merit, and I wouldn’t be opposed to that at all. But, if that happens, who would step in to take on Styles in the main event? Orton seems like a legitimate contender, but would his feud with Wyatt be over with that quickly? I’m not so sure.

Styles will walk away with the title Sunday night, and it wouldn’t surprise me if he pins Cena again.

This pay-per-view looks pretty good on paper, but of course, that doesn’t mean it will be. I have a feeling these talents will exceed expectations, however, and No Mercy will be looked at as one of the top pay-per-views of 2016. I usually like tempering expectations going into a pay-per-view, especially now that the rosters have been thinned and each brand had their own monthly event on the WWE Network. But SmackDown has been the superior brand for a few months now and Backlash was a very good show that I didn’t expect much from heading into it.

I’ll have your No Mercy recap right here at PhillyVoice on Monday morning.