Nola serves up a pair of home runs in Grapefruit debut 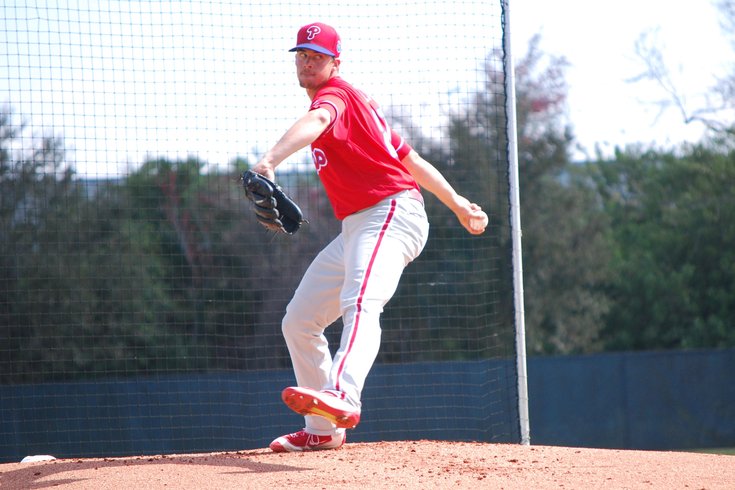 DUNEDIN, Fla. – Aaron Nola’s baseball life has changed for the better in the last 12 months.

When he checked into his first spring training a year ago – nine months since taking his last class at Louisiana State University – Nola was the team’s top pitching prospect but he was also a guy trying to find enough elbow room to change into his gray shirsey in the cramped and confined spaces of minor league camp. Since that time, Nola has taken the necessary steps from Double-A to Triple-A to the big leagues, he’s had success in the big leagues, and he’s found a more comfortable spot in a less crowded clubhouse in Clearwater.

Nola, 22, could choose to relax a little and enjoy the life of a major leaguer.

After all, it is still the first week of March and games won’t count for another four weeks or so. He is all but guaranteed a spot in Pete Mackanin’s rotation and has a chance to pitch on Opening Day (or the home opener at Citizens Bank Park a week later).

Nola does look more comfortable in his environment now than he did in July, when the clubhouse was still littered with veterans on their way out instead of prospects on their way up, as it is now. But the mentality hasn’t changed for where he still wants to be, no longer as a rookie with potential but as a veteran with regular results.

Nola served up a solo home run to Troy Tulowitzki on the fourth pitch he threw in his 2016 Grapefruit League season, and then allowed a three-run blast to Michael Saunders three batters later in the Phillies eventual 9-6 loss to the Toronto Blue Jays.

Nola allowed four runs on four hits and a walk in two innings. He didn’t strike out any of the 10 Toronto hitters he faced.

“I wasn’t really commanding,” Nola said. “My pitches were pretty much over the plate and they made me pay for them. I was getting behind in the count. My first-pitch strikes weren’t too good today.”

“The second home run, to right field, was one of those spring training home runs,” Mackanin said. “The wind was blowing out like crazy. You know, it’s early in the spring. You don’t really expect him to be perfect every time out. He did OK.”

Nola wasn’t ticked or angry or despondent as he stood inside the visiting clubhouse of Florida Auto Exchange Stadium. But he wasn’t particularly thrilled with the performance either, even if it was a two-inning outing in a Class A ballpark in early March.

“I still have to have results,” he said. “I still have to go out there and compete and try to get outs however I can. I don’t want to think about it that way. I want to try and work on everything and be successful with it and execute all my pitches.”

While he’s put in a lot of work this offseason in an effort to throw his changeup with more confidence, he’ll experiment with it this spring, but he’s not going to veer from his regular game plan play around either. While he’s going to break camp with the team on March 30, he’s not going to assume anything himself, or go out every fifth day with an older veteran’s of ‘getting my work in.’

“I still have to have results,” he said. “I still have to go out there and compete and try to get outs however I can. I don’t want to think about it that way. I want to try and work on everything and be successful with it and execute all my pitches.”

Execution was clearly an issue in the first inning, when Nola needed 29 pitches to get three outs.

But after his second inning, there wasn’t any reason to panic over a spring start from the sophomore pitcher. The Jays went down in order with three straight ground balls, the last from Tulowitzki.

“A little smoother,” Nola said. “I had a feel for my pitches a little more.”

Nola will have plenty more spring innings and game reps to continue to prep for his second season with the Phillies. Unlike last year, when he was summoned from minor league camp for a major league cameo, getting to start against the New York Yankees at Bright House Field during the last week of March before beginning the season in Allentown, Nola will stick around and take his turn every fifth day in Florida, building stamina and refining command.

If you count out the days between today and the start of the regular season, Nola should have five more spring training starts. If you factor in the March 16 off day in the Phillies schedule, his turn in the rotation would come up on April 5, on the second day of the season (and probably after Jeremy Hellickson, who preceded him Friday) when the games begin to count.

If the rotation continues to turn that way, his fifth day would also arrive on April 11, the first regular season game at Citizens Bank Park in 2016.

That’s a long ways from Saturday afternoon in Dunedin, of course, which is completely OK with Aaron Nola.

“I run into outings like that every now and then,” said Nola, who arrived in Florida five weeks ago. “I’m going to continue to work in those areas and not make those mistakes as much. Try not to make them again.”