The Camden Health and Athletic Association will launch with a $1 million investment from The Cooper Foundation, the Norcross Foundation and AmeriHealth New Jersey 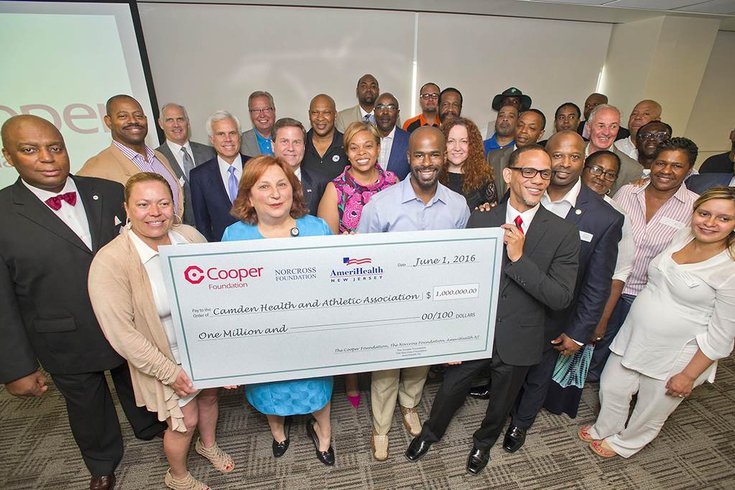 Dozens of sports personalities and elected officials joined The Cooper Foundation on Wednesday to announce a $1 million grant to fund the Camden Health and Athletic Association to benefit Camden youth.

The Camden Health and Athletic Association, a nonprofit aimed at providing financial support to Camden's youth sports leagues, launched on Wednesday with a $1 million initial investment by the Cooper Foundation of Cooper University Health Care, the Norcross Foundation and AmeriHealth New Jersey.

George E. Norcross III, chairman of the Cooper board of trustees, announced the association at Cooper University Hospital in Camden before a group of community leaders, former athletes, local politicians and elected officials.

"Strong youth athletic programs encourage healthy behaviors, create lasting memories and friendships for children who participate and their parents, and bolster a strong sense of community," Norcross said. "The Camden Health and Athletic Association will provide financial and administrative resources to help existing organizations as well as build comprehensive health and athletic programs to serve more young people in Camden."

The goal of the association is to strengthen the community and keep Camden’s youth healthy and active. In doing so, the nonprofit will act as an umbrella to will help facilitate the maintenance of the city’s youth sports groups to create new athletic programs, establish fundraising efforts and develop new playing fields and facility capacity.

"Youth sporting events have played an important role in many of our lives – creating a rich sense of community, building lifelong friendships, and encouraging healthy habits," Hilferty said.

Camden County police and sheriff's officers have offered to participate as coaches, umpires, referees and mentors. The Camden County Board of Freeholders will assess the condition of all athletic facilities and fields in the city to identify needs.

The CHAA will be headed by a corporate board and have advisory boards for each sport. It will enter into a management agreement with The Cooper Foundation for administrative support.

An athletic director will be hired and the inaugural program will be a soccer league this fall, followed by basketball in the winter. Baseball and softball programs will follow in the spring of 2017, and football and wrestling programs are in the plans.