Howard Caplan, who held a 'Hillary 4 Prison' sign on Roosevelt Blvd. before 2016 election, was escorted out of the room 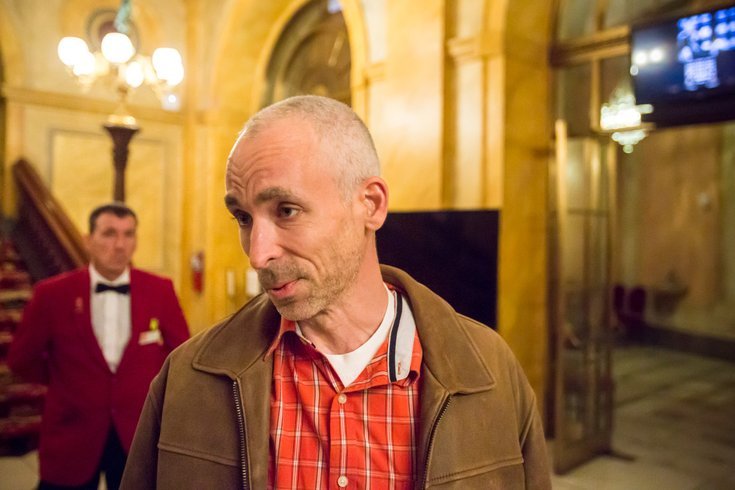 Over the weekend, Northeast Philadelphia’s Howard Caplan reached out via text message with hints about having “something newsworthy” to share in the subsequent days.

It was cryptic, to a point. Still, there was a track record that helped limit the possibilities.

This is the guy who held hand-drawn “Hillary 4 Prison” and “Expose Pedos #PizzaGate” signs along Roosevelt Boulevard for months and loudly interrupted events ranging from book appearances by Hillary Clinton and Joe Biden to Christmas-week Masses at the Cathedral Basilica of Saints Peter and Paul.

Caplan followed up with an update Wednesday night. It arrived just an hour after he’d taken his show to a sold-out Bill Clinton book appearance at the University of Pennsylvania’s Irvine Auditorium.

Clinton – recently in the #MeToo crosshairs as a result of a problematic “Today Show” appearance – was there with author James Patterson to promote their novel, “The President is Missing.”

Instead of shouting out questions about Monica Lewinsky, Caplan – as he is wont to do – bellowed out queries about Jeffrey Epstein and “the Lolita Express” in light of theories regarding an underage sex-trafficking ring.

As you can see in the video below, Caplan's actions were not well-received.

Among the responses was “Sit down and shut up.” Caplan didn’t abide by that request, and was escorted from the auditorium for disrupting the event.

In the lobby outside the room, he was told he was “acting like an insane human” in front of an audience that included children.

“If I could walk up to Bill Clinton and ask him a question, I would, but this is the only opportunity I get,” responded Caplan, who couldn’t believe that the security guards and Secret Service agents didn’t already know his name despite not having his identification handy.

A Philadelphia Police Department spokesman said their agency didn't respond to any calls regarding Caplan.

An email to the University of Pennsylvania's media office seeking information about the incident was not immediately returned on Thursday.

For his part, Caplan said the Secret Service asked for his identification and, when he refused to produce it, agreed that he didn't break any laws.

"They let me go. It was very cordial," he said, noting that he paid $100 for the ticket with a face value of half that amount. "They didn't even scan the tickets. I could have gotten in for free."