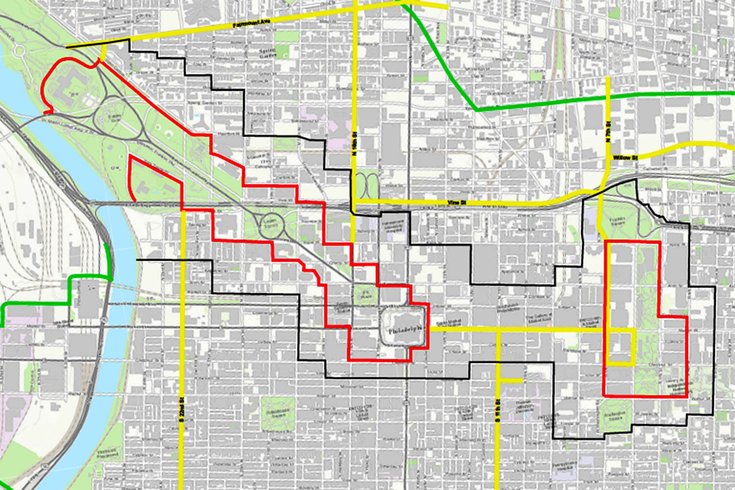 This map, provided by the City of Philadelphia, shows two planned perimeter fences in side the "traffic box." One encompasses the Benjamin Franklin Parkway and another Independence Mall.

Plans for two fenced security zones within the "traffic box" announced last week were unveiled Thursday by Mayor Michael Nutter, as part of Pope Francis' public events on the Benjamin Franklin Parkway and address at Independence Hall on Sept. 26-27.

Beginning at 10 p.m on Thursday, Sept. 24, a secure fenced perimeter – excluding all but residents and ticketed individuals – and a secure fenced traffic exclusion area will begin to be installed along the Parkway.

Screening, including passing through metal detectors, will begin at 6 a.m. Friday, Sept. 25, the mayor said Thursday.

At 8 a.m., traffic will be forced off previously announced emergency vehicle access routes within the larger traffic box, where vehicles are not allowed to re-enter if they leave.

At 6 p.m., on Friday, enforcement of the traffic box boundaries will begin.

A fenced security perimeter and a traffic exclusion area will go into place around Independence Hall at 10 p.m. Friday.

Nutter said residents in and near the exclusion zones – "down to the address" – will be notified in advance.

The mayor said a copy of the map he unveiled will be posted online within 24 hours.

But he also said it may take a week or more before entry points into the perimeters are identified to the public.

Detailed assistance for businesses within the traffic box should go online Monday, allowing them to better make plans about staying open, staffing, deliveries and related concerns.

George Hoffman, manager of the Art of Shaving on the 1500 block of Walnut Street, says it sounds like "a little bit of purgatory," but he was happy to hear his business is outside the fenced zones.

The shop, which routinely would have four employees Saturday and two Sunday, is leaning toward not opening that weekend, but it would wait and see the details announced online Monday, he said Thursday.

Next door, JR Johnson, the manager of Holt's Cigars, was pleased to find there is no fence blocking access to his store, but, "the major issue we face is how we will get our staff into the city as the majority of us live in the New Jersey and Pennsylvania suburbs and rely on public transportation and/or drive in. "

"Mayor Nutter’s suggesting businesses treat the event like a 20-inch snowstorm is not the most apt comparison in my opinion," Johnson said, "as it is much easier to make the call not to open when the city will be mostly vacant. But a business shuttering its doors to 1.5 million potential customers would be a real missed opportunity for any retail or hospitality business."

""One piece of promising news to come out of the press conference for us is that our business falls outside of the most secure zones, so once our employees get into the city they won’t be required to wait in long lines to get through checkpoints," Johnson said. "I look forward to reviewing the information posted on the city website come Monday so we can better prepare to serve customers and ensure the safety and well being of our employees during this unprecedented event."

A spokeswoman for Macy's said options, including closing, are under consideration for the weekend.

Cigar customer Tom Fitzpatrick said his wife and he are discussing either staying home in the Overbrook Farms section of the city and then sticking to travel in nearby Main Line or possibly going away for the weekend due to disruptions.

Nutter said businesses should consider getting deliveries, though he added limited overnight deliveries may be possible Saturday night.

Taxis will be allowed in and out of a designated traffic box up until 2 a.m. Saturday morning - hours before the pope’s arrival in the city. No decision has been made yet on access by Uber and Lyft vehicles.
Taxi stands within the traffic box will open at 3 a.m Monday morning, allowing pilgrims to make it to the airport for morning flights. Locations will be announced soon.
A trash collection plan is being worked on, but is not complete, said the mayor.