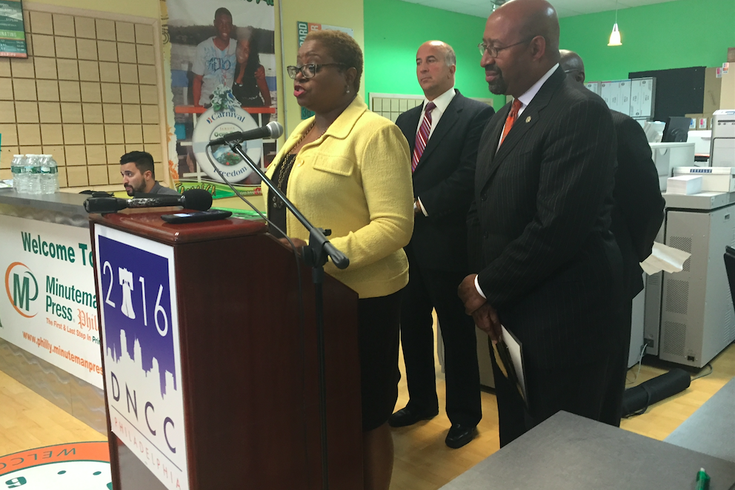 Read More
During a Thursday afternoon press conference at a South Broad Street printing-and-design business, the CEO of the Democratic National Convention Committee and Mayor Michael Nutter said efforts were underway to help local businesses profit from the July 2016 gathering that's expected to pump some $350 million into the local economy.
Joining the Rev. Leah Daughtry and Nutter behind a podium for the "launch" of DNC operations in the city was Jude Arijaje, owner of Minuteman Press.
"They don't treat me as a vendor," said Arijaje. "They treat me as a partner."
Already securing a printing bid from the committee, the print-shop backdrop was positioned as a totem for how other local businesses could profit when Democrats from across the country head to Philadelphia to nominate their candidates for president and vice president.
"We are here," said Daughtry, noting that the DNCC recently opened its office in Center City and will take steps to ensure local businesses learn all about the vendors' request-for-proposals process in coming weeks and months. "Our goal is the make sure this is the most inclusive [convention] in history. ... We want this to be a convention that Philadelphians are proud of."
To help businesses learn more, the group will host a webinar on Oct. 27 and a town-hall style meeting on Nov. 16.
An estimated 50,000 people are expected in town for the convention, which takes over the Wells Fargo Center from July 25-28, 2016. It's the first time the city has hosted a Democratic convention since 1948, though the RNC was here in 2000.
Nutter pointed out that it's a markedly different event from the recent World Meeting Families and papal visit, which left many businesses griping about lost profits thanks to excessive security. Convention goers, he said, will leave many local restaurants sans reservation availability.
"It's not as if someone is going to present Philly with a check for $350 million. That's not how this works," said Nutter, noting that hotels, restaurants, bars and service providers can cash in. "Every serious restaurant in the city should be sold out for the entire week. ... There will be no security issues in Center City."
Daughtry said the committee hopes to surpass a 35-percent minority participation rate in the bidding process, seeking businesses led by minority, women, veteran, or LGBT owners.