Former mayor calls Alan Butkovitz a 'liar' and a 'snake' after report focuses on more than $380,000 spent on hotels, trips and shoes 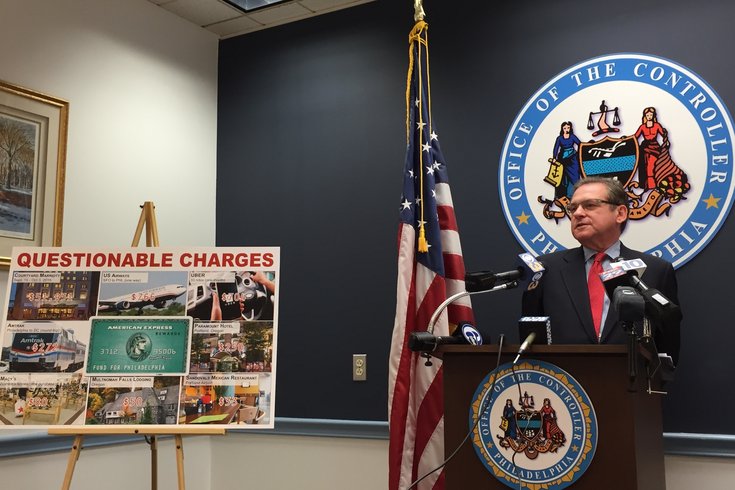 City Controller Alan Butkovitz announced an investigation into how the Mayor's Fund For Philadelphia was spending its money.

An investigation continues Tuesday into the spending of $380,000 – including a $45,000 trip to Italy by then-Mayor Michael Nutter and several staffers in June 2015 – from an account funded by proceeds from the Philadelphia Marathon.

The monies, from the Mayor's Fund for Philadelphia, were spent on hotels, trips and shoes in 2014 and 2015, with no receipts provided for most of the transactions, City Controller Alan Butkovitz said in a morning news conference.

No charges have been filed at this time, said Butkovitz, adding there would need to be more investigation. But he alleges that the former chairwoman of the Mayor's Fund, Desiree Peterkin Bell, may have mishandled funds. The Mayor's Fund is a nonprofit organization that seeks to "improve the quality of life for all Philadelphians," including education and health, environment and sustainability, and government efficiency and effectiveness, according to its website.

"The reserves account did not help fund projects to benefit all Philadelphians. It was a fund to benefit only a select few." – City Controller Alan Butkovitz

Peterkin Bell worked in the mayor's office for nearly six years, including the last four years as Nutter's director of communication and strategy. She lost her position when the Kenney administration took office in January, but then joined the Democratic National Convention Committee as a consultant in February.

"In fact, instead of making grant awards, it appears the former chairperson used the reserves account as if it were a special slush fund," Butkovitz said Tuesday.

Peterkin Bell did not immediately respond to a request for comment, but in a Facebook posting since removed, she wrote:

"I have been the focus for whatever reason of some people who have tried to discredit me for almost a year. I can only wonder what motivates them. Severe insecurity? The inability to live up to their own greatness? Not being comfortable in their own skin? I was raised by a family of warriors who had to fight for respect, dignity and to be seen and heard. I know who I am. And as I said the last time, I am a woman of faith and purpose and will continue to pray for those folks and strive to be excellent. Continue to watch, hate if you'd like but I am protected by the cloak of god and I am highly favored. NO weapon formed against me shall prosper."

In a statement, Nutter disagreed with the findings of the Butkovitz report, calling it a "hatchet job."

"I stand 100 percent behind the statement by Desiree Peterkin-Bell regarding the Mayor's Fund and its expenditures.  All expenditures were approved by the Board's Finance Committee, and the Executive Director in accordance the established procedures. Funds cannot be spent without the Executive Director's approval, and the Board Chair cannot expend funds," Nutter said. "This is the usual hatchet attack job by Butkovitz, timed to try to get some attention for himself while the FBI is diligently doing their job in other matters in Philadelphia.

"The Controller is a liar, a snake and a hypocrite," Nutter continued. "There is no truth in what he says, every expenditure was proper and for an approved purpose and he never talked to either Desiree Peterkin-Bell or myself about any concerns, which is standard procedure, before releasing this slanderous, libelous and vicious bile from his mouth. He is a sad and sick person."

Butkovitz countered Nutter's comments, saying "The former Mayor has provided a non-substantive response, as he did not provide any documentation to explain these expenditures.  These purchases were not approved by the Board and there was no evidence or proof to support these charges."

'IT WAS A FUND TO BENEFIT ONLY A SELECT FEW'

According to investigative documents, the Mayor's Fund of Philadelphia, in 2014, had $500,000 dedicated to grants supporting the five mayoral priorities. Those funds were split, with $300,000 going into a grants account and $200,000 into a reserves account that Butkovitz said had no oversight and "no rules for how ... to spend" the money.

The grants account was used to fund scholarships and grants for organizations for any of the five core functions, according to Butkovitz.

Butkovitz's office claims that of $393,091 in reserve account funds spent on 21 expenditures reviewed over the two-year period, under the administration of Peterkin Bell, only one grant — for $10,000 — was approved by the non-profit's board of directors.

"My understanding is she just told people to do things," said Butkovitz, when asked how Peterkin Bell was able to avoid getting approval from the board.

Butkovitz he was "especially troubled" by some of the expenditures paid with the remaining $246,091. Several credit cards were linked to the reserve account, and of the more than $100,000 of the expenditures charged to the account, the Controller's Office was only able to find relevant credit card statements — but no receipts or documentation to explain the spending. 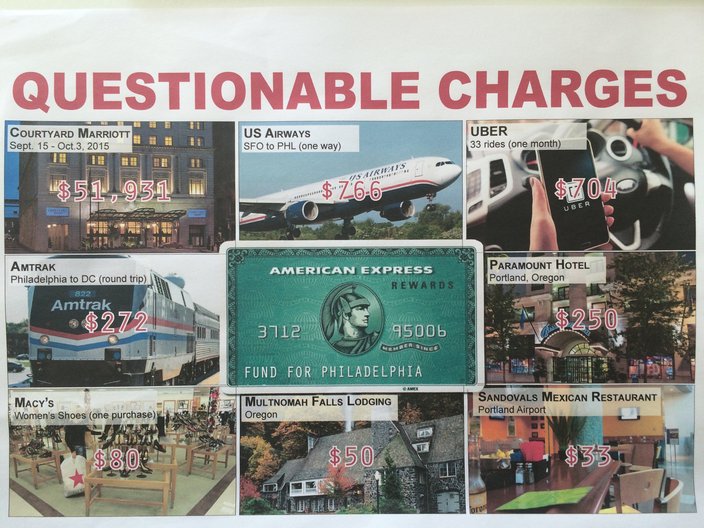 This graphic, produced by the City Controller's Office, shows a few examples of where the Mayor's Fund For Philadelphia was believed to have been spending money improperly.

"For example, almost $52,000 was charged at the Philadelphia Courtyard Marriott for expenses from Sept. 15, 2015 through Oct. 3, 2015. Again, there were no receipts or record of how many rooms were purchased or who the rooms were for," said Butkovitz.

Among the other charges that Butkovitz deemed questionable:

• $2,868 in charges for air fare, lodging and food on trips to San Francisco and Portland, Oregon

"The reserves account did not help fund projects to benefit all Philadelphians. It was a fund to benefit only a select few,"  Butkovtiz said.

Nutter's trip to Italy, at the time reported as a Vatican visit to finalize details of Pope Francis' visit to the city in late September 2015, wouldn't qualify as a "business expense," Butkovitz said.

"Under the IRS guidelines, that wouldn't qualify as a business expense. That would qualify as a vacation," he said.

Butkovitz cast Del Bianco, the Fund's executive director, as the person who flagged the questionable spending. He said the investigation began in January after Bianco reached out to his office with concerns.

In fact, he said, Del Bianco had tried to point out her concerns before Kenney took office, but "she was silenced."

"Virtually the very minute she had a new boss, she came over and asked for a review," he said.

Asked about criminal charges, Butkovitz said, "We don't have enough evidence to determine that right now."