Obama in North Philly: 'We’re at a moment when there’s backlash against progress'

The former President headlines get-out-the-vote rally for Casey, Wolf at the Dell 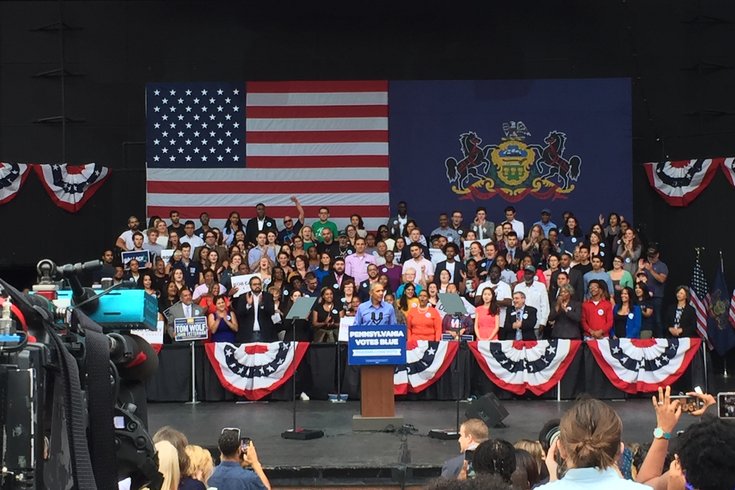 At a get-out-the-vote rally in Strawberry Mansion, former President Barack Obama shouted out the Eagles and Sixers (as well as Gov. Tom Wolf and U.S. Sen. Bob Casey) without once mentioning his successor by name.

The lines snaking across the Fairmount Park grass outside Strawberry Mansion’s Dell Music Center on Friday afternoon hearkened back to happier times for Democrats in Philadelphia.

When the queues formed 10 years ago, and then four years later, the smiling faces would be rewarded with victory, but turn to frowns in 2016 when anticipated victory unexpectedly became a loss fueled by vote tallies in the very same state.

And so state Sen. Vincent Hughes was able to take the stage at 3:45 p.m. and say – before shouting out numerous female candidates running for office across the commonwealth – that “we got a president right here in North Philadelphia, right on Ridge Avenue.”

He was talking about former President Barack Obama who – having recently rejoined the campaign trail as a vocal surrogate – was in town to rally support for fellow Democrats U.S. Sen. Bob Casey and Gov. Tom Wolf at a Pennsylvania Votes Blue rally.

“We can’t let another election slip past us,” said Hughes. “Let’s take back our country. We’re going to take it all back.”

The Dell holds some 6,000 people, but it was only about half-filled when those words were spoken.

By the time Casey, Wolf and Obama to took stage around 5 p.m., however, all but a couple hundred of seats would be filled.

It was a get-out-the-vote rally which felt, at times, like a communal therapy session, as evidenced by the number of people up and praise-dancing to “Ain’t No Stopping Us Now” during intermission and the standing ovation when Wolf was first to take the stage.

“You all know what is at stake in November, right?” he asked. “Donald Trump and Republicans are trying to roll back what President Obama and Sen. Casey have accomplished.”

That was met with a wave of boos.

“And here in Pennsylvania,” he said, “my opponent Scott Wagner wants to take Pennsylvania backwards.”

“People in both parties should be concerned about the direction of the country.” – Barack Obama

“I am standing up as the last line of defense for President Obama’s legacy and the principles we hold dear,” he said. “Nothing less than our democracy is at stake.”

Next up was Casey, who’ll bring U.S. Sen. Elizabeth Warren to town on Sunday afternoon for as voter-registration drive.

“Are you ready to win in 2018?” he said, shouting out veterans and organized labor. “We’re here today because we love our country, and we believe (the administration and Republicans in Congress) are taking us in the wrong direction.”

“I love me some Bob Casey,” he said, noting he supported his presidential campaign before most could pronounce his name. “He’s one of the nicest people I know, a genuinely nice person. He’s been in Washington for a long time and stayed nice, which is hard to do.” 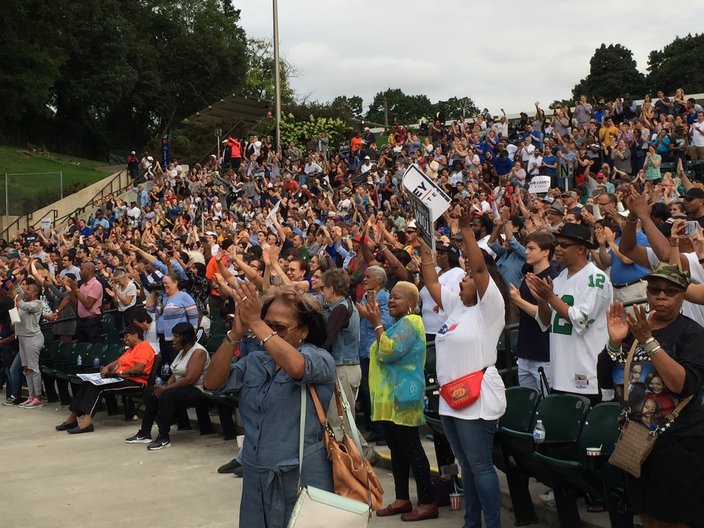 Thousands of people flocked to the Dell Music Center in Philadelphia on Friday, September 21, 2018 as former President Barack Obama headlined a get-out-the-vote rally.

He got a rather loud ovation when noting he hadn’t been back since the Eagles won the Super Bowl, shouting out the Sixers’ and the process.

“I came here to deliver a very simple message, and that is to vote,” he said. “I shouldn’t really have to deliver the message that, by now, you’d have gotten the message. This November’s election is more important than any other in my lifetime.”

“Sometimes, we’ve gone forward and then we’ve gone backwards,” he said, citing the Civil War and heated political battles throughout the decades.

And then – back in therapy session mode – he spoke about how the advances made during his time in office wasn’t the result of a single candidate who made great speeches, but because of people rallying together. Each advance is met with pushback, he noted.

“And we’re living in one of those moments now,” he said, citing the fears inherent in a “rapidly changing world” thanks to technology and demographic shifts. “We’re at a moment when there’s backlash against progress.”

Without naming his name – he didn’t say “Donald Trump” at any point during his 35-minute speech – he chided his successor for taking credit for economic advances that started well before he took office.

“The closer you get to election, the more you will see stuff like this,” he said, including other-ism and exploiting people’s anxieties. “The good news is that in a healthy democracy, that kind of fear-mongering doesn’t work, our antibodies kick in. But when there’s a vacuum in our democracy, when we don’t vote, other voices fill that void.

“That’s radical what they’re doing. They have a vision that says all they want to do is protect their power, even if it hurts the country,” he said. “People in both parties should be concerned about the direction of the country.”

Noting that he figured he was “preaching to the choir” since attendees got tickets to come see him talk, Obama said, “We need leaders who are going to stand up for what’s right regardless of political affiliation.”

And then he closed with a message of, you got it, hope.

“Out of this political darkness, I see a great awakening happening,” he said of people from a wide array of backgrounds choosing to run for office including “a record number of women.”