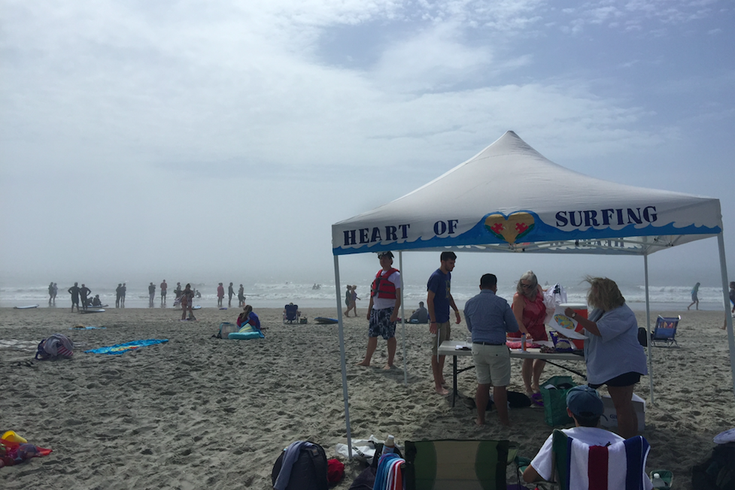 The 'Heart of Surfing' program held its weekly event at the 57th Street beach in Ocean City on Saturday, July 1, 2017. The beach-tag checkers took umbrage.

In the days since our report that the Heart of Surfing non-profit organization had an unfortunate run-in with beach-tag checkers – and, ultimately, police officers called to the 57th Street beach scene – the group which enables children with autism to surf has received an outpouring of support.

Businesses and residents offered to cover any costs involved in providing beach tags for families of those surfing children. Those donations, however, won’t be necessary, according to Ocean City Mayor Jay Gillian.

“The city is fully supportive of the Heart of Surfing program and will provide ‘mayor’s tags’ to the participants and their families going forward,” he told PhillyVoice.

That means temporary tags will be available for the organization to “pick up and distribute for each event.”

Cindy Fertsch, the group’s co-founder who found herself distracted by the beach-tag issue during Saturday morning’s event, couldn’t be more pleased.

She said she’d spoken with Michael Allegretto, director of the city’s Department of Community Services, in the days since the event.

“They apologized and said we won’t ever have the problem again. The city was supportive and kind,” she said.

When she requested the beach-tag fees be waived, she was told a request had to be made to the mayor’s office. The first she heard that had happened was when we shared the mayor’s comments with her on Monday afternoon.

“This is awesome news,” Fertsch responded.