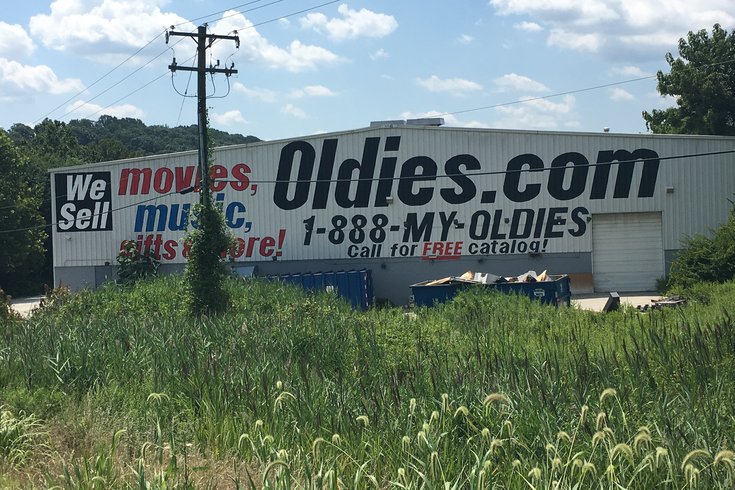 The Oldies.com warehouse is visible from the southbound lanes of I-476 near the I-76 exit.

For more than a decade, the Oldies.com sign painted on the side of a West Conshohocken warehouse has been an unofficial mile marker on Interstate 476, the roughly 20-mile stretch better known as the Blue Route.

Driving along the southbound lanes of the highway, it's impossible to miss the sign. Billboard advertisements aren't allowed on I-476, but the owners of the warehouse found a workaround by simply using the back of the warehouse.

The property at 60 Portland Rd., just north of the I-76 exit, has now been listed for sale, according to the Philadelphia Business Journal.

The origins of the Oldies.com warehouse — a repository of vintage music, movies and gifts — make for a fascinating story that PhillyVoice highlighted in 2017. The inspiration for the business traces back to a New York doo-wop group known as The Capris, whose 1959 single, "There's a Moon Out Tonight," captured the interest of 17-year-old Jerry Greene, an art student in Times Square.

Greene purchased the rights to the master of the unheralded song and re-released it in 1961, this time helping it earn major radio play and reach #3 on the Billboard singles chart. Greene moved to Philadelphia with the money he earned and joined partners in starting the Record Museum, a 25-store chain that later was sold and became Wall to Wall, followed by FYE.

After the sale of the business, Greene created a reissue music label Collectibles Records, which sold to larger retailers that have since gone out of business, like Strawberries and Tower Records. Melissa Greene-Anderson, Jerry's daughter, helped spearhead a pivot to a direct-to-consumer model that would complement the mail order business and expand into movies and pop culture merchandise.

The parent company of Oldies.com is Gotham Distributing Corporation, which also owns the movie side of the family business, Alpha Home Entertainment. Both divisions cater to vintage music and movies that have become less accessible in the age of downloads and streaming, leaving younger generations in a sad state of awareness about some of the lesser-known classic material of earlier eras.

The company purchased the 52,000-square-foot warehouse in West Conshohocken as a home base for its direct-to-consumer business. The Oldies.com site also is a treasure trove of vinyl, rare and out-of-print CDs, books, magazines, movies and gifts — often with deep price discounts.

A real estate broker for the warehouse told the Philadelphia Business Journal that Oldies.com only needs about 5,000-10,000 square feet of space and wants to test a hot market for industrial warehouse space. The price sought for the property was not specified.

If you've spent too many hours of your life miserably stuck in traffic on the Blue Route, now may be a good time to plan a visit to Oldies.com. The sign on the warehouse, one of those unusual things imprinted on the minds of people in the Philadelphia region, may not be with us much longer.