A Marriott hotel with 138 guest rooms, restaurants and a rooftop bar will be the first phase of the project 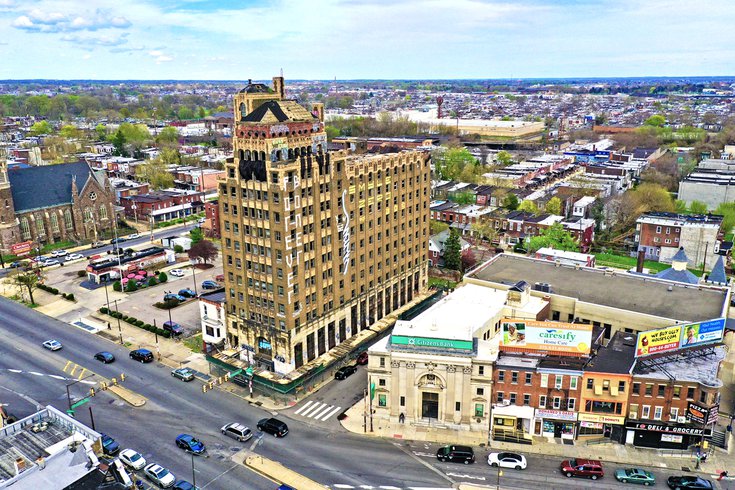 The Beury Building in North Philadelphia, best-known as the graffiti-tagged 'Boner 4ever' building, is at 3701 N. Broad St. near the intersection of Erie Avenue. The historic building and site of the former National Bank of North Philadelphia will finally be restored as a Marriott hotel, with a residential building planned next door at a later stage.

The long-vacant building was originally slated for redevelopment as a mixed-use property that would bring new affordable and market rate housing to the city's Hunting Park and Nicetown-Tioga neighborhoods. Initial plans called for ample commercial space and a dedicated group of nonprofit organizations with a focus on integrated community health.

Over the last few years, lengthy project delays and the stalling effect of the COVID-19 pandemic resulted in certain changes to the overall vision for the building and its neighboring property.

The historic structure will now become a boutique Marriott Hotel, since previous leasing plans for apartments inside the main structure were ultimately reconsidered and abandoned. The residential portion of the project will now be housed inside another building next to the high-rise on the north side of the property.

Shift Capital, the developer leading the charge on the restoration, announced last week that the first phase of the hotel project is now underway. The restored building will have 138 guest rooms, ground-level restaurants and a café, a rooftop bar and restaurant, a fitness center and meeting spaces.

Designed by architect William Harold Lee, the Art Deco building was constructed between 1926 and 1933 as home to the National Bank of North Philadelphia. It was later renamed after Charles Beury, the bank's first president and a former president of Temple University. The structure was added to the National Register of Historic Places in 1985, but has sat vacant for more than 40 years.

The building's decline coincided with years of disinvestment that have made Hunting Park and Nicetown-Tioga among Philadelphia's most disadvantaged neighborhoods.

The "Boner 4ever" and "Forever Boner" tags are the bold work of two different graffiti artists, "Boner" and "Forever," who collaborated to give the Beury Building a place in Philadelphia's urban lore well beyond its years of occupancy. 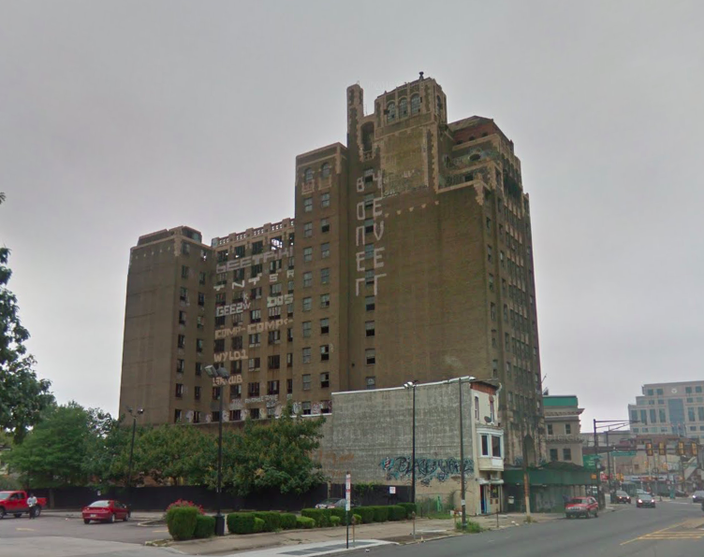 As much as the tags are beloved symbols along Broad Street, they don't appear to be part of the preservation effort. You can still buy pins, keychains, magnets and stickers that commemorate the graffiti, if it has a special place in your heart.


“This initial phase at the Beury turns a new page for the landmark building, which has sat vacant for four decades," Shift Capital CEO Brian Murray said. "The new hotel not only breathes life into a Philly icon but also creates economic opportunity for local residents and businesses.”

For the hotel project, Shift Capital is partnering with the Wankawala Organization, a hospitality group with multiple projects in the region. The organization's local projects include the Fairfield Inn & Suites Marriott on South 13th Street in Center City and the attached Libertine restaurant.

“We are excited to … see the history and beauty of the historic Beury Building restored," said Mihir Wankawala, a managing member of the organization. "We look forward to working with the local community to identify individuals who are seeking an exciting and rewarding career in hospitality.”

Shift Capital shared a few photos of the preliminary construction phase that's now underway at the Beury Building. This includes cleaning out and repairing the structure to get it ready for construction and development. The developer also shared a rendering of the lobby of the upcoming Marriott hotel. 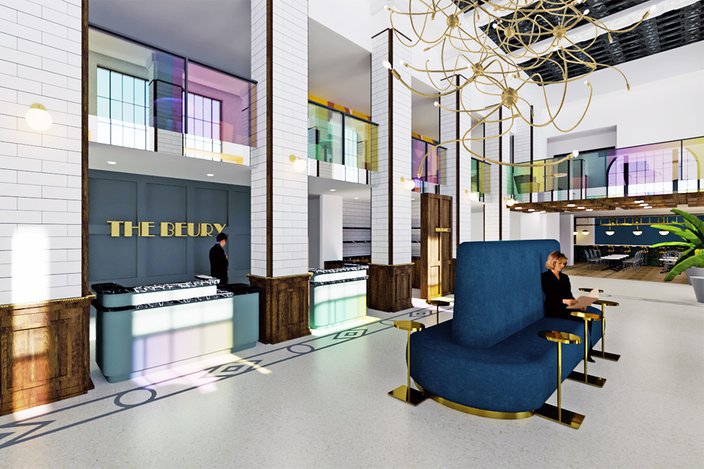 A rendering of the hotel lobby planned at the upcoming Marriott inside the historic Beury Building in North Philadelphia.

The developers have committed to inclusionary workforce goals such as temporary construction jobs and minority-owned contractors during the construction phase of the project. The goal is to employ a 35% diverse construction workforce with half of the workers coming from the Philadelphia area, in accordance with Shift Capital's integrated development strategy to invest in both places and people.


“We are taking an active, intentional local approach to hiring and bolstering our construction team," said Alex Robles, developer-in-residence at Shift Capital. "We are connecting with neighborhood and Philly-area residents to help build their skills and sharpen their tool belts, and to prepare the next generation of trade professionals.”

The first phase of construction at the hotel is slated to be completed by summer 2022, with phase two expected to start soon after.

The later stages of the project will feature the construction of The Residences at the Beury, a neighboring building that will include 113 residences on five stories, with 13,750 square feet of ground floor construction. Plans call for 63 market rate units and 50 affordable units, in addition to shared community spaces that may include some of the initial features revealed in 2017. 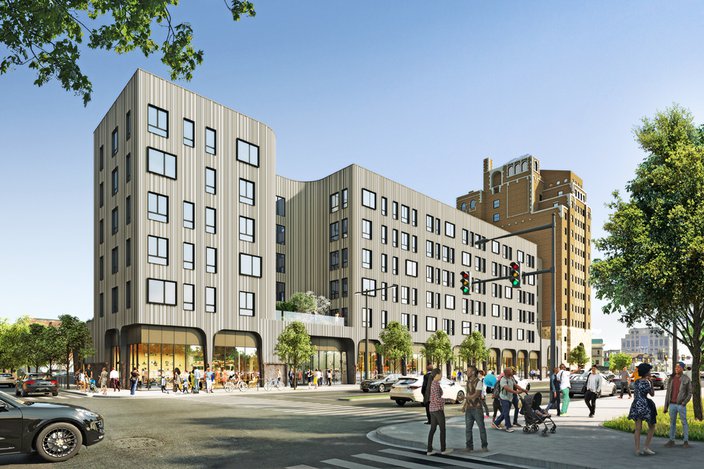 A rendering of the Residences at the Beury planned in North Philadelphia. 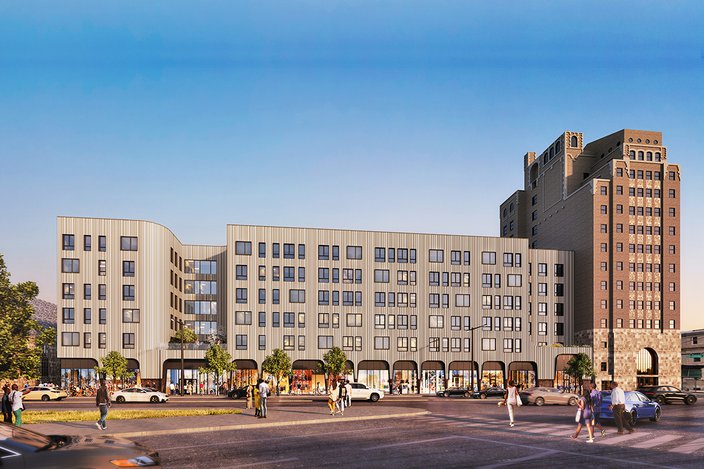 A second rendering of the Residences at the Beury planned in North Philadelphia.

A timeline for the completion of the residential building has not yet been determined.


Though not as prominent as the Divine Lorraine Hotel further down on North Broad Street, the restoration of the Beury Building holds some of the same promise for an extended revitalization of the North Philadelphia corridor.

Saying goodbye to "Boner 4ever" will be hard for Philadelphia — very hard, indeed. But it will mark a new chapter for a community and building that deserve a brighter future.