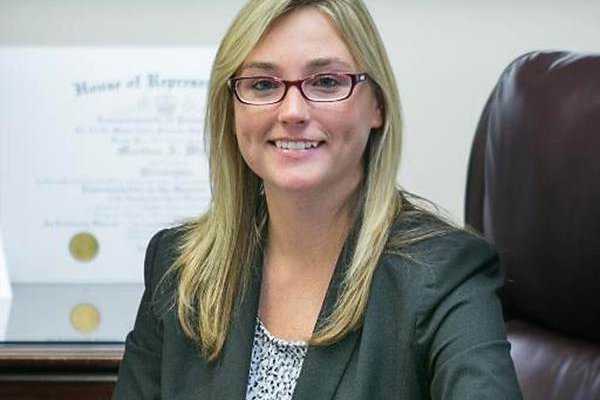 State Rep. Martina White, a Republican, was elected to the Pennsylvania House of Representatives in the 170th Legislative District in the Greater Northeast. Immigrant activists paid her a visit in Harrisburg on Monday, and were thrown out of her office.

Usually constituents’ visits with their legislators are made up of sharing stories, discussing policy and taking photos. But this year is apparently not your average year.

This week, 100 members of Latino and immigrant rights organizations gathered in Harrisburg for the Pennsylvania Immigrant and Citizenship Coalition's annual lobby day to discuss the future of our state. In past years, we’ve addressed programs in our schools, community relations and ways to undo the damage of outdated drug war policies.

This trip, the spectre of Donald Trump was heavy on our minds as the candidate who calls for banning Muslims and overseeing mass removal of immigrants has found protegés in the statehouse.

One of those people is newly-elected, 27-year-old state Rep. Martina White from our very own Philadelphia. We went to discuss her proposal to punish our city and others who seek to protect against the federal government’s harmful deportation practices. But instead, we were subjected to the shouting that is now circulating the Internet in a viral video of Rep. White.

Among the group of visitors was Gene Clever, a Vietnam War veteran and member of the New Sanctuary Movement who wanted to share his experience serving with non-citizens in the war. Pilar Molina, a local business owner and mother of two, was also present. She was hoping to share her story about how she fought for the reunification of her family after Immigration authorities stole her husband away and detained him for nine agonizing months of having to explain to her children that they would hopefully see their father soon.

We are her constituents. We are concerned about her bill. And, to me, we are what makes Pennsylvania great. But Rep. White berated us, called security, and later told the press that we are “frightening.”

What was frightening in that moment was the stereotypes she, a public official, was using to describe our community. What was frightening was to be greeted with such disdain by someone whose job is to represent our city, people like me and my family. What’s even more frightening is the obvious impact Donald Trump and his racist rhetoric is having on people like her and the other sponsors of the anti-immigrant bills in the capitol.

Bills like the one Rep. White is proposing do not make our communities safer or move our state forward but rather divide our communities and endanger Pennsylvanians. These bills are not based on common sense or best practices. They are policies based on antiquated stereotypes and the irrational fear Rep. White showed in meeting face to face with us. In Philadelphia, we’ve worked with Mayor Kenney to ensure the safety of all the city’s residents and to create policies guided by love, compassion and justice. Neither our city nor our state have room for Trump’s hate or for the bills his local impersonators are proposing.

Rep. White said, right as she was kicking us out of her office, “the benefit of being in America is that you have the freedom of speech.” The beauty of America is that this right is extended to all of us, including every person who was in that room. The freedom of speech comes directly from one of the most influential documents in our nation, coined right here in the cradle of Liberty: the Constitution.

It also states that all humans are created equal.

Erika Almiron is the executive director of Juntos, a Latino immigrant community-led organization in Philadelphia that fights for human rights as workers, parents, youth and immigrants.