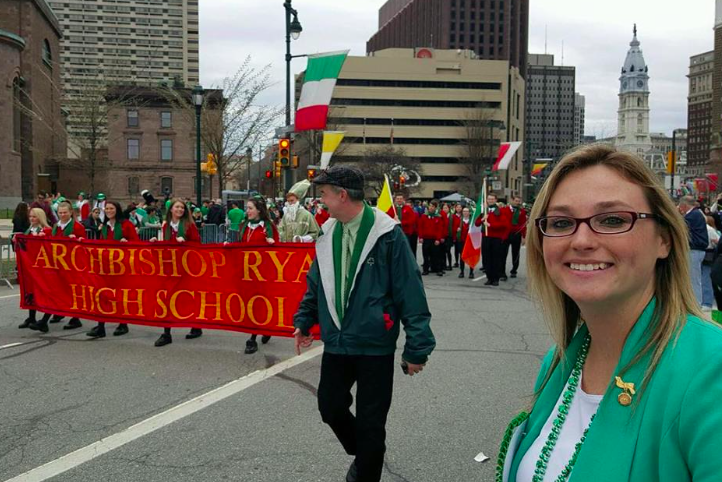 State Rep. Martina White (R-170th), shown at the St. Patrick's Day parade in Philadelphia, was involved in a confrontation with immigration activists at her Harrisburg office.

Al Dia News offered up one heckuva story involving a dust-up between state Rep. Martina White of Northeast Philadelphia and a quartet of immigrations rights advocates who showed up at her Harrisburg office on Monday.

Click here to see their full story about an incident that left the nascent legislator screaming at the activists to get out of her office. And to read White's response to the incident, keep reading to the bottom of this story.

If it’s an abbreviated version of events you want, here you go: Representatives of Juntos, Pennsylvania Immigration and Citizenship Coalition, the New Sanctuary Movement and Make the Road PA went west to talk to legislators about a series of immigration-related bills. The tie to White is a bill that seeks to penalize “sanctuary cities” like Philadelphia, a portion of which she represents at the Capitol.

Per Al Dia, White, who was elected to represent the 170th House District in a special election last March, invited the activists into her office as a courtesy but then the discussion veered into the area of “racist rhetoric.”

Yared Portillo of Juntos asked White if she wanted to be like “Trump in Pennsylvania.”

“I don’t feel that I need to respond to that,” White said. “Number one, I want you to know that my bill has no rhetoric in it. It is specifically to uphold federal law.” At this point, White starts raising her voice. “Right now there are people breaking the law by being here in our state illegally. You know that? You know that, right?”

Then, as you can see in the video below, White started screaming: “Please leave. I’ve asked you twice to leave my office!” The activists were then escorted out of the Capitol building.

With the story already making waves – immigration is, as you may know, a heated issue in a heated presidential election year – PhillyVoice reached out to White’s office for comment on the confrontation.

Her spokesman, Dave Foster, said she’d call back when she has a break during Tuesday afternoon’s House session. The phone rang around 4 p.m. with White saying she had a few minutes to chat before heading back to the House floor.

White said that she was "caught off guard, obviously" when a lone activist made her way into White's office while her secretary was away from the desk.

"I originally thought she was a college student looking to meet a state representative, but when I answered that I was Martina White, 'Is there something I can help you with?' she quickly called a group of people right into my office," the state representative said Tuesday. "There were 15, 20 people crammed in there, a small office, and it was uncomfortable. I said I only had 15 minutes because I have to be on the House floor to remark on a bill I've sponsored about fallen firefighters, but they didn't seem to acknowledge that."

White recounted that a bunch of questions were then thrown her way "rapid fire," but things quickly went awry.

"Once it got to the point where they were saying I'm a racist, and my bill's racist, I just think that's inappropriate and completely uncalled for," she said. "I'm looking to uphold federal immigration laws and they're defending illegal immigrants who've raped children, murdered people. It's a real shame that they're advocating for them. There's a big difference between an activist and an agitator."

As for the yelling, White said the group didn't respond when she asked them to leave several times. Her raised voice alerted security that there was a problem in her office as she didn't have a chance to call for their assistance, she said.

"I really didn't have a choice [but to yell]," she said. "It was certainly frightening having that many people in a confined space being opposed to my viewpoint. It's one thing to be opposed to my viewpoint, but to take advantage of a situation like that just goes to show you the type of people I was dealing with."