The deal now totals more than $4.5 billion and is pending approval in federal court 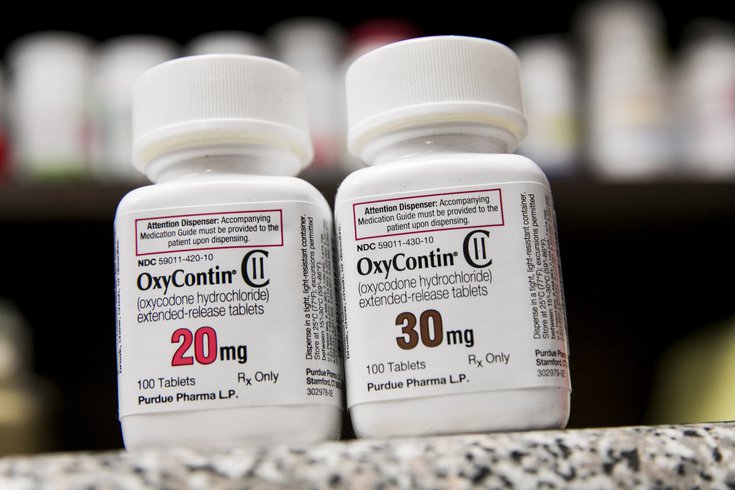 Pennsylvania would receive $225 million and New Jersey would get $110 million in a new proposed settlement with Oxycontin-maker Purdue Pharma. The money would be used to combat the opioid epidemics in both states. Above is a file photo of two OxyContin pill bottles at a pharmacy.

A new agreement with OxyContin-maker Purdue Pharma would payout millions to Pennsylvania and New Jersey over the next nine years, money that would be used to fight the opioid epidemics in both states.

Pennsylvania and New Jersey are among 15 states this week that agreed to drop their opposition to Purdue's bankruptcy reorganization plan in exchange for the pharmaceutical company increasing its settlement payout from $3 billion to at least $4.5 billion, among other terms.

The new settlement sum includes $225 million for Pennsylvania, the Associated Press reported, and more than $110 million paid to New Jersey.

The deal still must be certified in federal court.

"I know there is no amount of money that can make up for the loss of the parents, siblings, children and neighbors, but we intend to put these billions to work immediately to help address this crisis moving forward and to save lives," Shapiro said Thursday.

OxyContin is an opioid-based, prescription painkiller. Opioids account for 65% of drug overdoses in Pennsylvania. In 2018, the most recent year of data, 2,866 people died from opioid overdoses. In Philadelphia, data shows that opioid-related overdoses accounted for more than 85% of total overdoses in 2020. Of the 1,214 drug overdoses in the city, 1,041 involved opioids.

"With their reckless push to drive up profits by saturating society with highly addictive opioid painkillers, the Sacklers and Purdue Pharma harmed millions of individuals and families in New Jersey and across the country," Grewal said Thursday. "As I've said previously, these defendants were morally bankrupt before they ever declared actual bankruptcy, and we were determined not to let them take the easy way out. We were determined to make them pay."

The new settlement would require Purdue to disclose tens of millions of internal documents, which the attorneys general who support the agreement said would help hold the company accountable for its role in the U.S. opioid epidemic. The deal also has the the Sackler family – the owners of Perdue Pharma – paying $50 million, which gives them personal immunity against lawsuits.

"While this deal is not perfect, the Sacklers have used bankruptcy as a shield for true accountability for their role in jet-fueling this epidemic that takes 13 lives a day in our Commonwealth," Shapiro said.

Purdue faced thousands of lawsuits from state and municipal governments and other plaintiffs over the marketing of its painkiller and pursued bankruptcy protection in 2019.