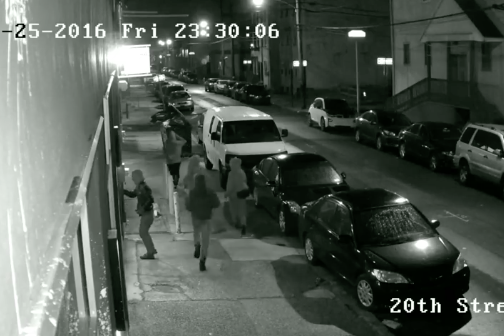 Surveillance of vandalism at Ori Feibush's office at 1936 Washington Ave.

Developer and former Philadelphia City Council candidate Ori Feibush is offering $25,000 for information about who vandalized his Point Breeze office earlier this week.

A police spokesperson confirmed Wednesday that officers assigned to the Seventh District responded to a call at 1936 Washington Ave. Saturday where they found 19 windows and the sidewalk vandalized with spray paint and paintballs. "Gentry scum" was also spraypainted in orange paint along the building, police said.

Feibush, who posted a surveillance video to his Facebook on Monday, said that seven people were involved in the incident.

"Please share this video and message," he wrote in the post. "There is no place for this kind of behavior in our City."

Police confirmed that South Detectives are investigating the incident.

In May, Feibush was awarded $34,000 in a civil lawsuit against Councilman Kenyatta Johnson, whom he ran against in 2015. Feibush claimed in the case that Johnson purposefully did not introduce legislation that would have authorized the purchase of two vacant lots in Point Breeze.

The Johnson-vs.-Feibush battle gained controversy during the campaign run. Former Mayor Michael Nutter once called him "some little jerk with a big checkbook," Philadelphia magazine reported.