Supporters rally with donations to save livestream of bald eagle family 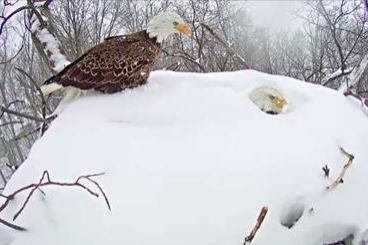 With Pennsylvania's budget impasse entering its sixth month, a community of enthusiasts rallied to save the Game Commission's popular livestream of a bald eagle nest overlooking Codorus State Park in York County.

The nearly 13,000 members of the Hanover, PA Eagle Cam Facebook group grew concerned that without a 2016 state budget, the Eagle Cam would become a casualty before it entered its second season, The Morning Call reports.

Then the donations started pouring into the nonprofit Friends of Codorus State Park, which contributed $2,400 to keep the camera installed over the nest of two bald eagles in Heidelberg Township.

Last year, the stream attracted about 1.5 million people worldwide as the eagles hatched and brought up their offspring.

The donations, which ranged from $10 to $400, will be used to cover the cost of renting a forklift and hiring a technician to install the camera above the nest.

According to Lori Neely Mitchell, a media services representative for the Pennsylvania Game Commission, the appeal of the livestream is attributable to a photo of the snow-covered mother eagle sitting atop her eggs.

Corporate sponsors for the project include HDonTap and Comcast Business.

When active, the steam can be accessed here.