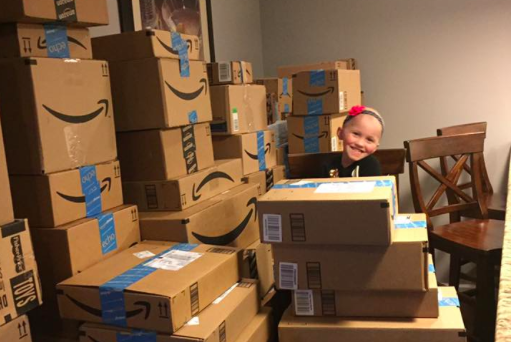 Jillian Massey, 4, pictured with boxes from toy drive for Children's Hospital of Philadelphia.

It could well be that kindness is more abundant in the world than any of us imagined.

Jillian Massey, a 4-year-old from Coopersburg, Pa., wanted to show her gratitude to The Children's Hospital of Philadelphia after completing chemotherapy and stem cell transplant treatment for medulloblastoma, according to ABC News.

Nicknamed "Sassy Massey," Jillian was diagnosed with cancer in April and remained at CHOP until she was deemed strong enough to go home in October. During that six-month period, she made plenty of friends who were also undergoing treatment for various conditions.

To show her love and support for those friends, Massey launched a toy drive with the help of her parents. Originally, the goal was to collect a modest 50 toys. She wound up with 3,000. Within two days of creating an Amazon wish list, all of the noted items had been purchased.

All of the toys will be delivered to CHOP on December 19, just in time for Christmas.

"You are all providers of sunshine for kids at CHOP who's skies are grey," the Massey family said in a Faccebook post. "That my friends is what life is about. You have filled my heart this season with the greatest gift... gratitude."

Jillian, meanwhile, continues to progress in her recovery and has spent the past few weeks welcoming an avalanche of boxes.