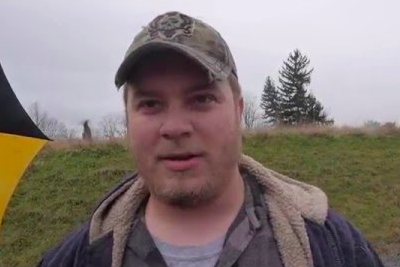 John Pisone was fired from his position at MMC Land Management after photojournalist Tom Jefferson posted a video of his racist tirade on YouTube.

A Pennsylvania man has been fired from his job with a land management company after a video surfaced online showing him spewing racial insults at a peaceful protest held by anti-fracking activists against a controversial drilling project in Butler County.

The man, identified as John Pisone, was exposed after photojournalist Tom Jefferson posted a video of the incident to YouTube on Monday, according to Raw Story.

On Thursday, Pisone offered an apology to Jefferson during an television interview with WPXI 11 News, calling what he said "stupid" and saying he was "angry."

In Jefferson's video, Pisone is seen challenging the presence of the protesters and questioning their value to society. After accusing the protesters of never having worked a day in their lives, Pisone turns to Jefferson, the cameraman, and insults him for being black.

"Just like this chimp right here," Pisone said. When one of the protesters asked him to repeat what he just said – meanwhile, the whole interaction is being filmed – Pisone replies, "Yeah, chimp. A f---ing n----r right here with a mop on his head. I don't give a f---. He's milking my f---ing tax dollars."

A few of the protesters attempted to reason with Pisone, but on a day when his work was rained out, he decided to continue to "teasing" them. At one point, Pisone mimes the sounds of a chimpanzee and claims he has only seen 10 black people in his entire life.

Asked by the WPXI reported if he is racist, Pison replied, "I wouldn't say I'm completely racist ... I exploded and I went to what I thought would cut the deepest, and that was very stupid of me."

Pisone was initially identified incorrectly as an employee of Rex Energy, however a statement was later provided on Facebook by MMC Land Management, which denounced Pisone's conduct and confirmed that he had been fired from his position.

Today, we were disgusted to learn that one of MMC’s former employees used racial slurs and made racially charged comments during a peaceful protest in Mars, Pennsylvania, outside of work hours at a location with which we have no affiliation. We are sorry that this incident occurred. Whether at work or not, we do not condone hate speech - EVER. Inclusion and diversity are among MMC’s core values. We believe in equality for everyone, regardless of race, age, gender identity, ethnicity, religion or sexual orientation. MMC has terminated this employee and will never do business with him again in the future.

Jefferson is currently working on a documentary entitled "The Way We Live," which is focused on social justice and climate change.

"I just let him talk and keep the camera rolling," Jefferson wrote in a post along with the YouTube video posted below (Warning: Video contains deeply offensive language).

The protest that upset Pisone stemmed from an ongoing battle over six proposed drilling wells on Rex Energy's Geyer well pad, a permitted site located within one mile of the Mars School District campus, which serves 3,200 students. Demonstrations have been held over the past year amid reports linking Pennsylvania fracking operations to health problems and encroachment on territory housing the state's most vulnerable residents.