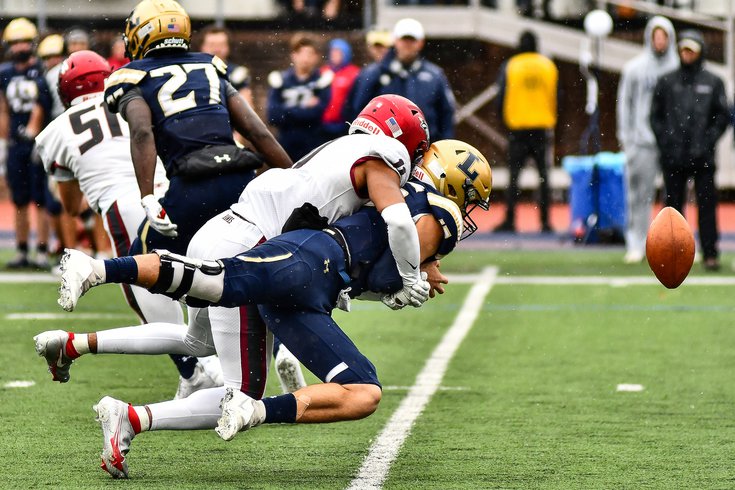 As the season lurched forward, the question hovered: When would the real St. Joseph’s Prep team emerge, or would it surface at all this season?

There were glimpses here and there, though nothing substantive. Even the Hawks themselves wondered.

Then it happened last Saturday in an explosive 35-7 romp over Catholic League Red Division rival La Salle in the championship game at Penn’s historic Franklin Field.

At the eye of that storm was 6-foot-4, 210-pound senior Rocco Nicholl, who has been all over the field for the Hawks during his career, starting out at cornerback, then moving to safety, then to drop-down safety, and now to strong-side (SAM) linebacker.

Last Saturday, Nicholl was all over the field, causing chaos for La Salle with seven tackles, two tackles for losses and a strip-sack, which caused a fumble and turned the tide of the game early for the Hawks.

After assuming the No. 1 spot again in the area, St. Joe’s Prep (8-2) takes on Penn State-bound Ken Talley and Northeast on Saturday at 6 p.m. at Cardinal O’Hara High School in the PIAA District 12 Class 6A championship.

The winner advances to the PIAA Class 6A quarterfinals next weekend and the loser sees their season end. It’s what Nicholl’s strong play prevented last weekend against La Salle.

Nicholl has been terribly under-recruited, so whichever college program lands him, they’re going to get someone who is only going to blossom further with added weight and possibly additional height. Nicholl is still growing.

“Rocco has a bright future, with his size, his length and just how plays,” said Hawks’ coach Tim Roken, who, along with his his staff, has done a very underrated coaching job this season with a young team. “He’s shown us he has the ability to play in space, and this year, having taken on a bigger role at the SAM linebacker, learning how to spill [disrupt a play at the point of attack], and set an edge.

“Rocco has really learned a lot in the last three years with us in different positions. He played cornerback two years ago, played safety last year and was asked to play the SAM. He’s grown into the position as the year has gone on, and he’s very coachable.”

It many ways, Nicholl exemplifies the Hawks this season, a team that had to grow, learn, develop and adjust into new roles. The team that thumped La Salle on Saturday could beat any Class 6A team in the state.

It’s all coming together at the right time—in late November, early December during the state playoffs. It’s become commonplace to call this time of year in high school football “Prep time.”

“Rocco’s versatility gives us the flexibility to move him around, and he’s playing well with our scheme and everyone believes in one another,” Roken said. “It’s been the keys to our success — it’s always been the key to our success.”

If there’s another very under-recruited player in the area that bears watching, it’s Ridley’s 6-foot, 205-pound senior tailback Tahir Mills. All he’s done in the district playoffs is rush for a combined 726 yards on 72 carries, and 10 touchdowns—in two games. He’s averaging 10 yards a carry against defenses specifically designed to stop him.

At 5A District 12, Imhotep Charter will play Catholic League 5A champ Father Judge at 12 p.m. at Northeast High on Saturday, while in District 1 5A on Friday, No. 2 seed Strath Haven will host No. 6 Academy Park at 7 p.m. in an all-Delaware County affair, and No. 1 seed West Chester Rustin will host No. 5 Plymouth-Whitemarsh at 7 p.m. Friday.