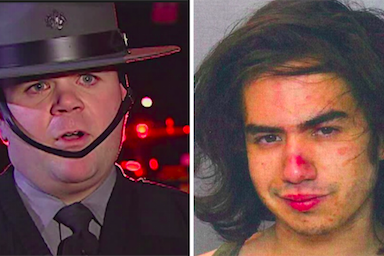 A Pennsylvania state trooper who allegedly attacked a longboarder in Harrisburg last May is now facing criminal charges following an investigation into his use of force.

Trooper Ryan Luckenbaugh, 36, is charged with oppression, simple assault and harassment in the May 16 incident that was captured on police dash cam video, PennLive reports.

The alleged victim, 25-year-old Christopher Siennick, says Luckenbaugh struck him with a baton, Tased him and repeatedly punched and kicked him. The incident was reportedly provoked by a verbal exchange between Luckenbaugh and Siennick, who claims he gave Luckenbaugh the middle finger after the trooper verbally abused him while he rode his longboard home from work during the early morning hours.

A second trooper involved in the incident, Michael J. Trotta, will not be charged but was fired from the force last year due to an undisclosed internal matter.

After Siennick's arrest, he was charged with 14 misdemeanors and felonies, including aggravated and simple assault, resisting arrest, reckless endangerment, disorderly conduct, flight, obstruction of highways, drunkenness, disregard of traffic regulations, violations of statutes regulating pedestrians, and "propulsion of missiles into an occupied vehicle."

Unable to afford his $250,000 bail, Siennick spent three weeks in Dauphin County Prison. The charges were later dropped after Dauphin County District Attorney Ed Marisco reviewed the dashcam video – which has not been publicly released – and determined there was no basis to prosecute Siennick.

After the altercation, police claimed Siennick smelled of alcohol, hit the patrol car and spat at them when asked to get out of the roadway. Siennick alleged that the trooper's exact words were, "Get off the street, faggot." When Siennick complied, he said the officers circled the block before exiting the cruiser to violently ambush and arrest him. The claims made by police could not be substantiated after the investigation and review of the dashcam video.

Siennick filed a civil lawsuit, Siennick v. Trotta and Luckenbaugh (Pennsylvania State Police), last August. According to the lawfirm representing him, Siennick is active in Harrisburg's skateboarding community and is a social justice advocate for civil and environmental causes. He said prior to this incident he had a positive relationship with police and had even volunteered in a program co-sponsored by his local police department to teach autistic children how to skateboard.

Luckenbaugh, who enlisted in the Pennsylvania State Police Academy in 2006, had been placed on restricted duty during the internal affairs investigation.

The case will be prosecuted by the Dauphin County District Attorney's Office.