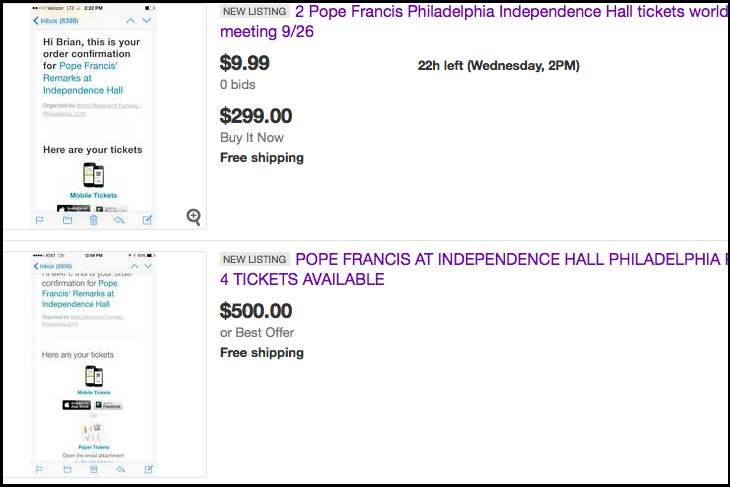 Free tickets to see Pope Francis speak at Independence Mall later this month were completely claimed within two minutes of being made available Tuesday.

Naturally, it didn't take long for those tickets — made available online via the World Meeting of Families — to begin appearing on the secondary market.

A quick eBay search revealed more than a dozen users hawking tickets to the Sept. 26 event, where Pope Francis will deliver a speech on immigration and religious liberty to a ticketed crowd of 10,000 people. eBay users were requesting varied amounts for the tickets, ranging from $125 to nearly $500 per ticket.

One user, bestseats07, listed 10 available tickets despite the WMOF limiting any one individual to obtaining four tickets.

Told the tickets had quickly found their way to Ebay, Mayor Michael Nutter offered a stern reaction during an afternoon press conference.

"I think that's pretty ignorant, to be honest," Nutter said. "Pope Francis comes to Philadelphia to speak on immigration and religious freedom. You get a free ticket and then throw it up on the site and try to sell it. At least in the neighborhood that I grew up, that's trifle. It's just trifle. ... That's just wrong."

"We would hope that anyone who acquired a ticket to Independence Hall would have done so with the intention of being part of this historic event with Pope Francis and not to sell it," the statement said. "That being said, we live in a free-market economy and just as we cannot control the rates at which individuals rented their homes to pilgrims, we also cannot control whether or not they decide to sell these tickets."

The later-afternoon speech marks Pope Francis' first public event in Philadelphia. Following the speech, he will participate in the Festival of Families on the Benjamin Franklin Parkway. He also will serve a papal Mass on the Parkway on Sunday, Sept. 27.

Pilgrims do not need tickets to attend the Parkway events, but a significant chunk of the Parkway — including the best sightlines — is reserved for ticket holders.

The WMOF will make 10,000 free tickets available to each of the Parkway events Wednesday. Additional details regarding the reservation process will be shared later today.

Parkway tickets initially were allocated only to the 219 parishes in the Archdiocese of Philadelphia and Catholic Social Services, among other select groups. But backlash to that announcement forced event organizers to release additional tickets to the public.

The ticketed portion of the Parkway stretches from Eakins Oval to 20th Street.

Pope Francis will parade down the Parkway prior to the Festival of Families, providing an opportunity to see him up close. A shorter parade also is being planned to precede the papal Mass.