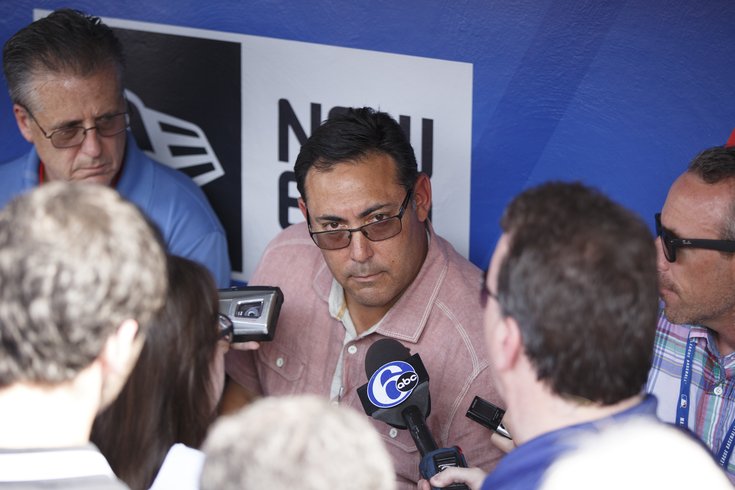 Can Ruben Amaro find a Cole Hamels trade to his liking?

In this city’s sports landscape, the football team is what everybody associates with the idea of culture, but it’s applicable everywhere. For instance, the baseball team made a transaction on Tuesday afternoon at least partially out of desire to improve its clubhouse chemistry. On that front, mission accomplished.

As Ruben Amaro, Jr. made crystal clear after trading Jonathan Papelbon, the 34-year-old closer pitched very well throughout almost four seasons in Philadelphia. A move had to be made, though. In Papelbon’s words, it was time to s*** or get off the pot. His displeasure would have only increased if he remained a Phillie past the trade deadline, and that type of personality could have hampered the rest of the team’s productivity in the season’s final third. Even if the Phils are baseball’s worst team, it’s not an ideal situation for young players like Maikel Franco and Aaron Nola to develop next to someone who doesn’t want to be here.

When asked if Papelbon’s temperament increased his desire to remove the star reliever from the equation, Amaro admitted there was “probably some element of that.” Translation: Why yes it did!

“He’s a quirky guy,” Amaro said. “But he’s certainly somebody that I want to have the baseball in their hand when it’s time to win a championship.”

That is precisely why the Washington Nationals acquired him, because this year could be their time to capture a title. Demoting Drew Storen, who has been excellent in the closer’s role this season (1.73 ERA, 1.91 FIP, 10.9 K/9), could make for an awkward situation, but an already solid bullpen and strong team just undeniably became even better on paper. Here is how the trade essentially shook out, with the monetary specifics kindly provided by The Washington Post’s Barry Svrluga:

Or, if you’re more of a visual learner (I wanted to make a Congressman Peter Russo joke, but it's far too soon): 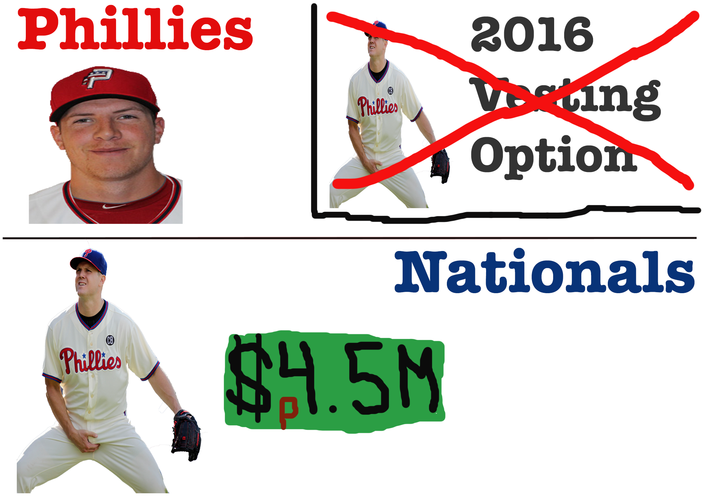 For the Phillies front office, trading Papelbon within the division was worth getting out of the $13 million vesting option he likely would’ve received if he had stuck around. For Papelbon, taking a $2 million pay cut in 2016 was worth the opportunity to pitch in meaningful games again. As a Phillie, he finished with a 2.34 ERA in 237.2 innings pitched, and recorded a franchise-record 123 saves. As Larry David often says on “Curb Your Enthusiasm,” that is pretty, pretty, pretty, pretty good.

“He had an extraordinary career with us,” Amaro said. “The fact of the matter is, he was as good as advertised and maybe better. We just didn’t play very well around him. Unfortunately, we didn’t have the kind of club that was the reason for him to be here.”

Expensive closers are a luxury, and a team as downtrodden as the Phillies had little use for the highest-paid reliever in baseball (even if they have miraculously taken nine of ten games out of the All-Star break). Papelbon, who Amaro said spent the scheduled off day on Monday at his home in Mississippi and remained there as the trade talks heated up, is expected to join his new team in Miami on Wednesday.

“This guy wants to win,” Nationals general manger Mike Rizzo told The Washington Post. “First and foremost, he wants to win. … He excels in pressure situations and that’s his personality. Does it grate on the opposition at times? Yes it does. But he comes with high credentials, high praise from his teammates and guys who’ve been around him.”

The “high praise from his teammates” part is up for debate, although new closer Ken Giles offered a positive review of Papelbon after his first save of 2015 up in Toronto. How the Nationals adjust to their new closer should make for an interesting dynamic to monitor from afar, but the brutally honest Papelbon finally got his wish. He’s going to close games for a contender.

Now, all of the attention shifts to the Phillies’ top trade deadline priority, Mr. No-Hitter himself. Unlike Papelbon, Cole Hamels hasn’t really been publicly vocal about his desire to leave Philly, but the 2008 World Series MVP also very much wants out. The potential transaction has been discussed at length all season in lieu of focusing on the on-field product. It is the type of move that can have a long-term impact much greater than a back-end starter that provides organizational pitching depth.

After Hamels’ dominant performance on Saturday at Wrigley, Amaro called and congratulated him on the accomplishment. In truth, there is less urgency to trade Hamels than Papelbon because of his starter skill set and contract that should be viewed as a positive (buzzwords: team control) as long as his stuff doesn’t deteriorate. Still, it would behoove the Phillies to make an acceptable transaction sooner rather than later. Unfortunately for Hamels, the performance for the ages didn’t affect trade talks too much according to his general manager.

“People keep talking about the timing was terrific because it was so close to the trade deadline,” Amaro said. “The fact of the matter is even though he had a couple of starts prior that were kind of subpar for him, we all knew that he is one of the better left-handed pitchers in baseball. That’s a fact. I don’t know that it affects his mystique or value, but it was a really exciting time and I was very happy for him.”

Throughout the Hamels saga, Amaro has been rightly or wrongly portrayed as a general manager with outrageous demands, a naïve decision maker who will only settle for a one-sided deal that completely guts his trade partner’s farm system. Whether the characterization is fair or not requires at least some conjecture, but the man himself is pushing back against it. After coming to an agreement to send the Phillies’ eccentric closer down I-95, Amaro made it a point to stress that trades should be mutually beneficial.

“For me, trades are about trying to improve clubs on both ends,” Amaro said. “For me, it’s about making sure each club gets what they want and trying to be equitable. This was one of those baseball trades I did with Mike Rizzo that I think is appropriate for both clubs.”

Trading Papelbon wasn’t a walk in the park by any means, but the Phillies’ asking price was much lower than it currently is for Hamels. Now the real work begins, trying to find an appropriate baseball trade for the 31-year-old ace lefthander. Amaro and the front office haven’t been able to procure one of those yet in over a year’s time, and they have less than 48 hours to do so until the offseason.

Hamels' next start is pushed back to Friday night against Atlanta, which is after the deadline. Things are about to get really interesting down at Citizens Bank Park over the next few days.