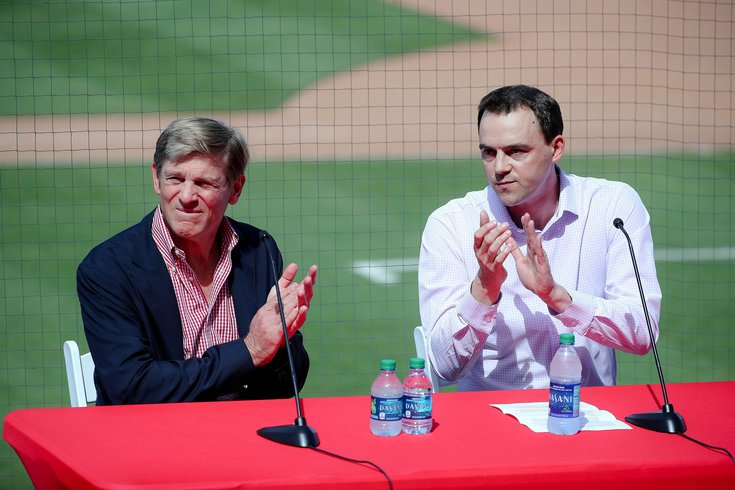 Like the sun setting into the Gulf of Mexico after a spring training game in Clearwater, another Phillies season is almost certainly dipping below the horizon before a single postseason game has been played.

For those keeping track, that will be seven empty Octobers in a row. And you know what that means.

Fingers will be pointed. Fault will be found. Heads will be demanded, preferably upon a platter.

The blame game has some extra bite this time around, too, because expectations were so high at the beginning. J.T. Realmuto! Andrew McCutchen! Jean Segura! David Robertson! And, of course, the piece de resistance, Bryce Harper. Dropping out of the sky on managing partner John Middleton’s private jet, bringing the frenzy to a full boil.

Then, just when it seemed hopes couldn’t possibly get any higher, the Phillies opened the regular season with four straight wins, powered in part by three Harper home runs, outscoring the Braves and Nationals by 31-13 in the process.

We now know those giddy days didn’t last. We now know that, despite taking two of three from the Mets over the weekend, they’re not going to win the wild card this year. We should also have known all along that every baseball season is a complex organism with countless variables and that to try to isolate one or two individuals to explain what happened, good or bad, is silly.

But we do it anyway.

With that in mind, let’s take a long look at general manager Matt Klentak. With manager Gabe Kapler, he’s become one of the lightning rods for discontent as his fourth season on the job wraps up. That’s probably not surprising. Holding the GM responsible for miscues both real and imagined is a time-honored tradition in these parts. Just ask Ed Wade and Ruben Amaro Jr.

Who can forget, during the 2005 season, fans hoisting a TRADE WADE banner in the 700 level of Veterans Stadium? “I told (son Ryan) not to worry, that he wasn’t going to be traded,” Wade quipped.

And never mind that he operated under severe budgetary restrictions during the first part of his tenure, helped turn the franchise around by signing free agent Jim Thome when the purse strings loosened, hired Charlie Manuel and fielded teams that contended until the bitter end in four of his last five seasons on the job. In fact, the ’05 club would have made the postseason had the two-wild-cards system been in place then. Instead, he was let go at the end of the year.

Amaro was blasted for taking over a team that won the World Series in 2008 and not bringing home another trophy. And never mind that he collected Cy Young candidates as if it were his hobby and the team he inherited won another pennant and four more division titles and set a franchise record with 102 victories in 2011. In hindsight it’s clear that the Phillies didn’t move quickly enough to replace its aging nucleus... and also that that was an organizational decision, not one necessarily driven by the general manager.

You’ve probably guessed by now that I’m not inclined to eviscerate Klentak. If you fervently believe he’s the problem, it will be better for your blood pressure if you stop reading now. Otherwise, please continue.

If anybody had reservations about his offseason moves, they kept pretty quiet about it at the time. He totally revamped the offense and improved the defense. Not only that, he was able to move first baseman Carlos Santana to allow Rhys Hoskins to move from left field back to his natural position.

And, it seems to me, that he reacted pretty well on the fly when things started to go sideways.

McCutchen was lost for the season on June 3 when he tore the ACL in his knee. By then, Harper was the only outfielder left from the Opening Day roster. Aaron Altherr had been designated for assignment, Nick Williams had been optioned to Lehigh Valley and Odubel Herrera had been placed on administrative leave after a domestic abuse allegation.

Klentak got Jay Bruce from the Mariners and Corey Dickerson from the Pirates for next to nothing and even got Seattle to pay all but $2.75 million of the remaining $21 million Bruce was owed. Both made immediate impacts.

When eight – eight! – relievers that had been counted on to be part of the bullpen went on the injured list, they survived in part because guys like 34-year-old Blake Parker (signed in July after being released by the Twins), 34-year-old Jared Hughes (claimed on waivers from the Reds), Mike Morin (contract purchased from the Twins in July) were able to pitch significant innings down the stretch without looting the farm system.

The real slam on Klentak seems to be that he should have done more to reinforce the rotation going into the season. Well, three things about that:

And even if relying on the arms on hand was a miscalculation, well, every general manager makes mistakes.

Pat Gillick thought it was a good idea to trade Gio Gonzalez and Gavin Floyd to the White Sox for Freddy Garcia going into the 2007 season. Garcia went 1-5 with a 5.90 earned run average in 11 starts and was allowed to walk away at the end of the year while Gonzalez and Floyd have won nearly 200 games since that deal. Gillick gave free agent Adam Eaton a 3-year, $24.5 million contract and he was so ineffective (7-13, 6.52) in the first two years the Phillies ate the final year of the deal.

This, mind you, is one of a handful of general managers with a plaque in Cooperstown.

Look, Klentak is a long way from proving he can field three world championship teams like Gillick did.

He’s also a long way from proving he can’t.