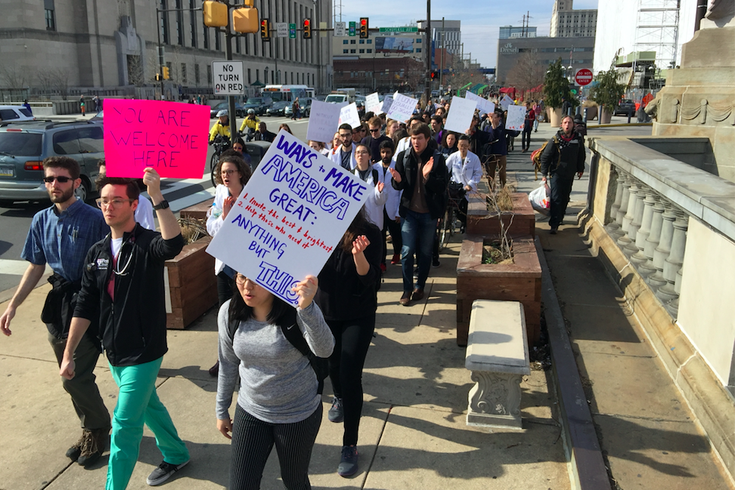 A group of University of Pennsylvania students marched from their campus to U.S. Sen. Pat Toomey's Center City office on Wednesday, February 8, 2017 to express their displeasure with President Donald Trump's proposed immigration policies. It was helmed by students at the university's Wharton School of Business, of which Trump is an alumnus.

Their protest message was simple: As students at the University of Pennsylvania, they wanted to tell the world that Donald Trump’s immigration agenda reflects neither their values nor those of their school, which just so happens to have close ties to the president and his family.

At noon on an unseasonably warm Wednesday, nearly 100 of them gathered at the LOVE statue on the Ivy League campus’ Locust Walk.

They chanted “No Hate, No Fear, Refugees are Welcome Here” and “No Ban, No Wall, Philadelphia Welcomes All” while waving signs including “We Are All Immigrants,” “I Didn’t Immigrate Here For This S***" and “Muslims Make America Great,” as they marched nearly two miles to U.S. Senator Pat Toomey’s local office.

They were able to do so peacefully and safely with the traffic-control help at intersections along the way courtesy of officers from their school, neighboring Drexel University and the Philadelphia Police Department.

Upon arrival roughly a half hour later, they delivered two cardboard boxes holding more than 3,000 signatures of support for an open letter crafted by students at the university’s Wharton School of Business.

A handful of organizers also got an unexpected meeting with Toomey’s staff after two staffers came downstairs to get those boxes in the lobby of a JFK Boulevard office building that’s regularly seen protesters out front.

Toomey has become the focus of protesters’ attention because the senator is viewed as a proxy for Trump, and a local elected official who has the power – should he choose to exert it – to stand up to the president.

“We’re here because Senator Toomey has said he would not be a rubber stamp for the president. He said to hold him to that, so that’s what we’re doing.” – Clifford Marks

“We’re going to tell him what we put in that letter. Senators have the power to tell Trump to stop,” said rally organizer Clifford Marks, an M.D./MBA candidate at Wharton. “We’re here because Senator Toomey has said he would not be a rubber stamp for the president. He said to hold him to that, so that’s what we’re doing.”

He also noted that he didn’t think that meeting would prompt Toomey to rethink long-held views “or let us start writing his press releases.”

Still, he told the crowd – it represented both a wide spectrum of ethnicities and schools within the university beyond Wharton – that the message he wanted to leave with staffers was that “we’re not going away.”

Along the march route, a slew of passersby whipped out their mobile phones to get pictures or video of the protesters, who remained on the sidewalks through Penn and Drexel’s campuses, past 30th Street Station and along Market Street into Center City.

They got minimal blowback.

One gentleman in a white pickup truck with New Jersey tags yelled “Build that wall,” a minivan driver hollered “get a job” and a woman standing near 19th and Market streets inexplicably opined that “none of them are even old enough to get Medicare” as protesters chanted about the proposed wall on the U.S./Mexico border.

A medical student at Penn, Ben Emert was among the marchers. As the son of refugees from Russia and Hungary, he said the controversial immigration proposals strike a particularly personal note.

As he marched along 34th Street, he said he was worried about the flurry of activity related to immigration in recent weeks and his perceived “lack of listening and understanding” coming from Toomey. He was also quite concerned about what the prospective Affordable Care Act repeal would mean to him from a professional perspective.

“It’s insane to think about how many people without insurance could be coming to the hospital because of these programs getting rolled back,” he said. “It will make our work much more difficult.” 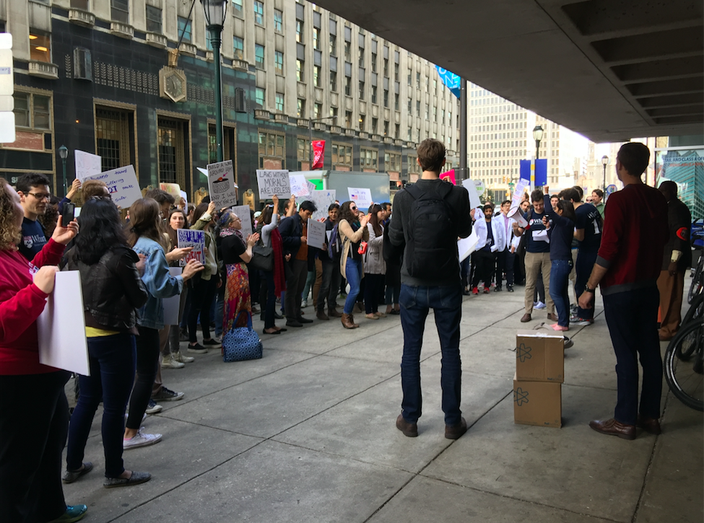 Irene Hong, who attended Penn as an undergrad and is now a second-year law student, marched at the front of the pack. She said being an Asian-American female and active political protester fueled her “personal sense of unity and solidarity” with those who would be impacted by immigration and travel bans.

“We are a unified voice, representing over 3,000 members of the University of Pennsylvania community," she said. "Together, we declare that Trump's immigration executive orders do not reflect our community's values of freedom of expression, association and belief."

Asked about the meeting between staffers and protesters, Toomey spokesman Steve Kelly couldn’t get into specifics but said the senator does, in fact, listen to their message.

“Senator Toomey and his staff are doing everything they can to reach out to people who have asked to have their voices heard, whether that be through direct meetings, phone calls or emails,” he said. “Today’s meeting between staff and students from Penn regarding immigration issues is an illustration of that effort.”

For his part, Marks said after the meeting that staffers "noted that Senator Toomey had voiced concerns about the implementation of the executive order and would defer to the judgment of the court."

"They offered to try to help individuals who we knew who are affected by the ban, for which he conveyed our appreciation and promised to be in touch as needed," Marks said.

They also asked that Toomey "personally meet with students in Pennsylvania who are affected by the ban, hold a town hall in Philadelphia to hear the concerns of his constituents here and back legislation rescinding the executive orders on immigration rather than hiding behind a mealy-mouthed press release," said Marks.

"We were told our views would be relayed," he said.