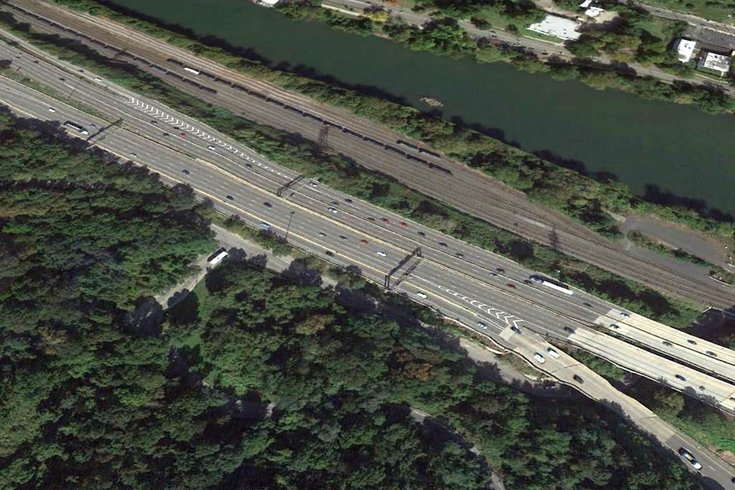 Vehicles travel the stretch of the Schuylkill Expressway between Roosevelt Boulevard and City Avenue, named one of the worst traffic bottlenecks in the nation.

The Pennsylvania Department of Transportation is considering major changes to traffic patterns on Interstate 76, including opening the shoulder lane during peak times, Philadelphia Business Journal reports.

Using the shoulder as an extra lane of traffic on the Schuylkill Expressway would be a first for Pennsylvania officials looking to alleviate decades of congestion on the highway, officials said.

"We know we need to do something, and we know we are restricted by the steep slope of the bedrock on the one side and the river on the other side," PennDOT Secretary Leslie Richards told the Business Journal.

In November, I-76, known locally as the "Surekill Expressway," claimed a spot on a list of the 50 worst traffic bottlenecks in the nation.

The 0.8-mile stretch of I-76 between City Avenue and the Roosevelt Boulevard, came in at No. 36 on the list, with an estimated total delay of 700,000 hours annually. The Montgomery County portion is used by an average of 109,000 vehicles daily.

As part of its "Interstate 76 ITS Enhancements" study, PennDOT will also consider how technology can be used to improve traffic flow.

Early-action initiatives include optimized variable speed limits that can be altered "based on traffic conditions and inclement weather with the intent of harmonizing traffic flow," [Lou] Belmont said.

PennDOT is working with navigation app Waze for real-time information like road conditions, crashes and more.

The study is expected to be completed this spring.