Next week's auction will feature nearly 600 vehicles, but only one of those vehicles drives on land and floats in water 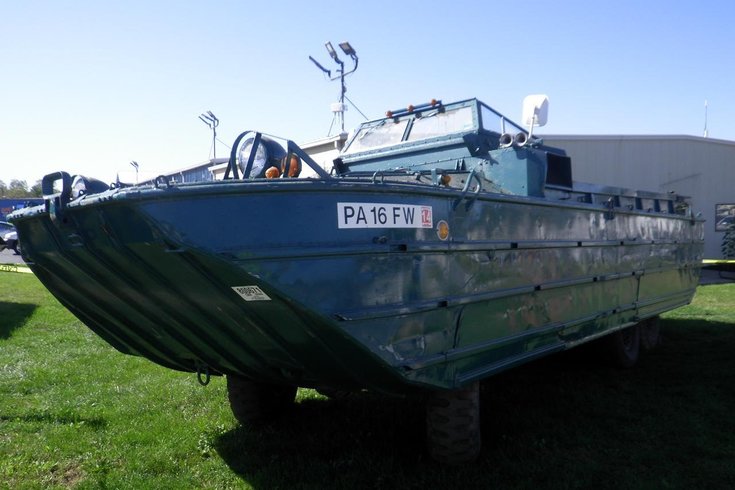 The Pennsylvania Department of General Services is auctioning off nearly 600 vehicles, including this 1943 GMC DUCK Boat.

The Pennsylvania Department of General Services is holding an enormous automobile auction on Oct. 22 in order to get rid of vehicles that are no longer used by state agencies. The auction will feature nearly 600 vehicles, including a runaway standout: a 1943 GMC DUCK Boat.

The World War II-era amphibious vehicle is officially called a 1943 GMC DUKW DUKW-353, which is a long title that gets in the way of saying this is a DUCK Boat.

Here's a documentary about DUCK Boats, subtitled "The Truck That Went To Sea", which is a fantastic subtitle:

The boat has been driven a scant 2,008 miles, according to the auction listing. It's being sold because it's no longer used by the Pennsylvania Department of Conservation and Natural Resources. You can look at some more photos of the very cool DUCK Boat at the listing.

The auction will also include some cars, like a Porsche Cayenne and a Jaguar XF, but honestly who cares about cars when you can buy a DUCK Boat? I certainly do not.

MORE: What to know about proposed bill that would legalize marijuana in Pa.

Buyers at the auction are allowed to purchase vehicles with cash, along with money orders, cashier's checks, certified checks, or bank checks. (Obviously, the best way to buy a decades-old DUCK Boat would be with cash.)

The auction takes place at the Manheim Keystone Pennsylvania Auto Auction in Grantville, Pennsylvania, roughly two hours outside Center City, on Oct. 22. The event begins at 10 a.m. The state is encouraging anyone interested in attending the auction to pre-register.