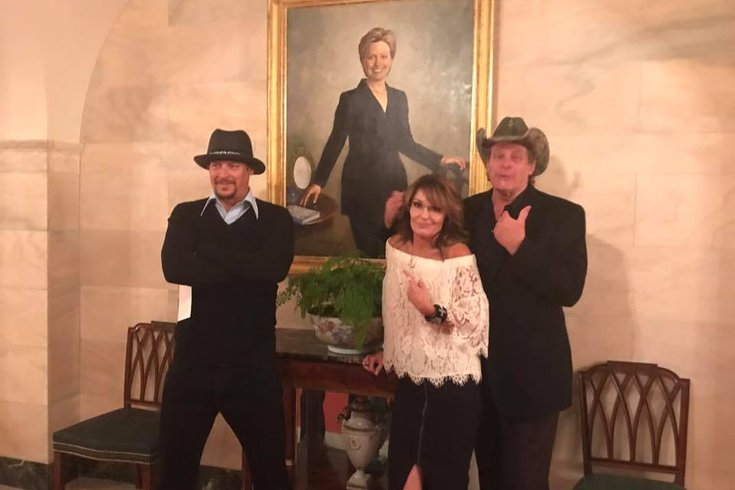 Sarah Palin posted this image of her, Kid Rock and Ted Nugent standing near a painting of former Democratic presidential candidate Hillary Clinton hanging inside the White House.

Pennsylvania state Sen. Daylin Leach is at it again.

The Montgomery County Democrat, who invited a whirlwind of media attention in February for asking President Donald Trump to 'come after him' and calling him a s---gibbon, has weighed in on the controversial photo of Sarah Palin, Ted Nugent and Kid Rock posing in front of Hillary Clinton's portrait at the White House.

The photo, was posted to Facebook on Wednesday by Palin, former governor of Alaska and 2008 Republican vice presidential candidate, after she and the two country rock stars had dinner with Trump.

In the photo, the three are smiling and Palin is pointing at the portrait. The picture was perceived as a slight against Clinton, who lost the 2016 presidential election to Trump.

On Friday morning, Leach said on Twitter the photo was the toughest game of "F---, marry kill" he had ever played.

I've got to say, that this photo led me into the hardest game of "F---, marry, kill" that I've ever played. pic.twitter.com/YJ8SNSAMd0

"Daylin was making joke," Leach's spokesperson Steven Hoenstine said of the tweet on Friday. "People may disagree about whether it's funny or appropriate. That's the nature of jokes."