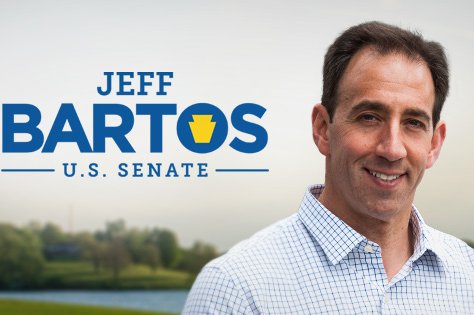 In his "Hometown" video, Bartos decries the struggles of his hometown while "Bob Casey's Washington is booming," and the video switches to two images of cranes and another of cars driving down a busy urban street.

The problem? One of those images of "booming" Washington is actually of a Chinese city. Per The Washington Post:

...there’s a jarring, sweeping image of girders going up in a city much larger than Washington. On Getty Images, it’s labeled “aerial view of construction, shoot by drone,” and supplemental information makes clear that the picture is from the city of Hangzhou, with more than 11 times the population of Washington — and with no height limit.

Bartos, who grew up in Reading, is positioning himself as an outsider in his bid to challenge Casey, almost half a year after Donald Trump took the presidency — and Pennsylvania — on a wave of anti-Washington sentiment.

"I’m Jeff Bartos — I’m running for Senate to end destructive trade deals, secure our borders and restore the American Dream," his campaign website reads. "I’ve spent 20 years building businesses and giving back to my community, while career politicians have spent their time trading favors and scheming to get re-elected."