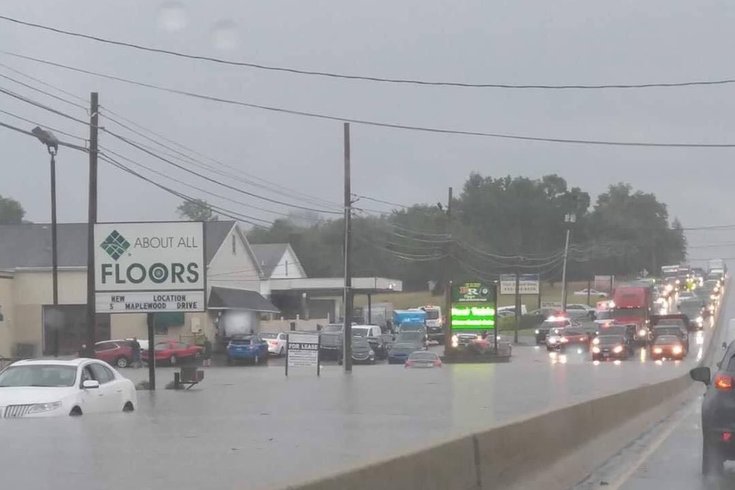 Torrential rain fell across the majority of eastern Pennsylvania on Thursday, leaving plenty of roadways and communities flooded, including this stretch of road in Berks County.

Torrential rain fell across the majority of eastern Pennsylvania on Thursday, leaving plenty of roadways and communities flooded.

The National Weather Service reported that up to six inches of rain had fallen in Southeastern Pennsylvania as of 4:45 p.m., and flash flooding was occurring in the area.

According to the National Weather Service, a number of water rescues were reported in Berks County and Montgomery County:

***Flash Flood Emergency*** for southeastern Berks and northwestern Montgomery Counties. This is an extremely dangerous and life threatening situation! Do not attempt to travel in those areas! Serious flash flooding is ongoing with a number of water rescues reported! #PAwx

Here's a sampling of the flooding southeastern Pennsylvania saw, with more on its way:

How hard is it raining right now in Philly? Water is dripping from one of the lights INSIDE the @SEPTA train car I'm on right now. ☔ #pawx

Crazy rain here today. First photo shows a manhole cover lifted off the opening by water from below. #flooding pic.twitter.com/Yro2cOZgUA