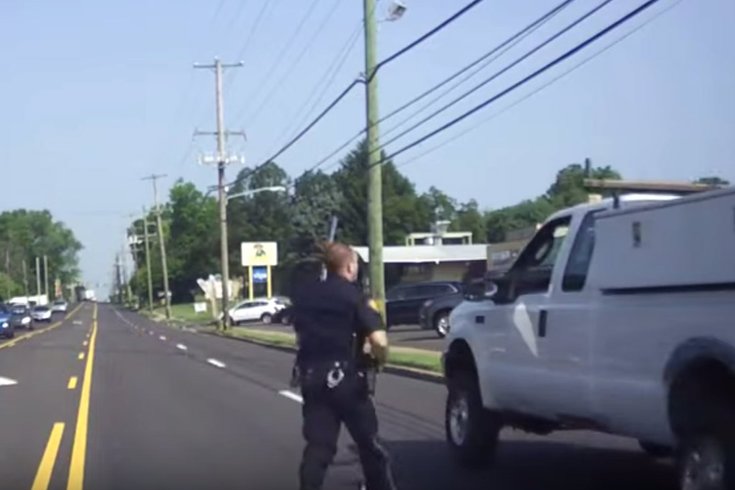 In dashboard camera video, Warminster police Officer Ryan Bunda is seen running to stop a white pick-up truck on County Line Road, near Newtown Road, on Tuesday. As the truck traveled at slow speed and in traffic, Bunda jumped out of his car and raced to open the truck door and hit the brake. The truck driver had suffered an active seizure.

A police officer in Bucks County is being praised as a lifesaver after he came to the rescue of a man experiencing a seizure in his truck in Warminster Township.

Dashcam footage from the patrol car of Officer Ryan Bunda shows a nerve-racking situation that unfolded Wednesday morning in the area of County Line Road and Newtown Road.

At around 9:30 a.m., Bunda observed the passenger of a Ford F-250 waving his arms frantically to get the attention of police. The driver of the truck appeared to be in convulsions.

Bunda ran up to the vehicle, which was traveling at a slow speed, and observed that the driver was in distress and having a seizure.

After opening the driver's side door, Bunda managed to bring the car to a complete stop by placing his hand on the brake.

A passing Huntington Valley firefighter noticed what was happening and assisted Bunda in bringing the driver of the truck to the side of the road, where they were able to call him an ambulance.

"Officer Bunda’s rapid and decisive actions were both heroic and lifesaving," Warminster Township police said in a statement.

There was no immediate word on the condition of the truck driver, but his emergency was not believed to be life-threatening.