A music video is shot, leading to drama amongst characters on the docuseries about 'Dancin on Air' 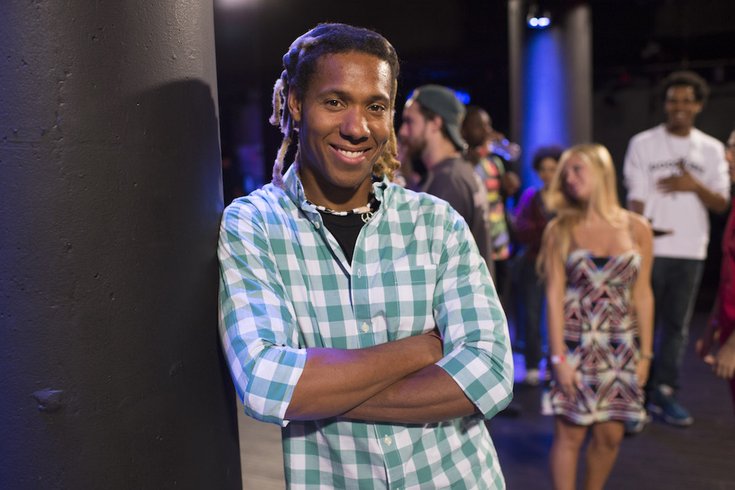 Photo of "Dancin' on Air" star/Courtesy of Fuse

Betrayal. Doubt. Exploitation. Grappling with the expression of one's sensuality.

These are a few of the themes that defined the penultimate episode of the first (and possibly only?) season of “Saturday Morning Fever,” the Fuse TV docuseries that takes a few of us viewers behind the scenes of “Dancin’ on Air.”

But it was acceptance of one’s limitations – and a deep yearning to transcend them – that emerged as the focal life lesson gleaned by the time the half hour was through. Allow me to explain.

After the requisite cityscape shots, we revisit the video that, in last week’s episode, “juggernaut funk musician" Ian Eagle Ashanti shot at Prism Brewing Co. in North Wales. There is a reason for this!

To Ian, the video is “all that,” and as the JFM shows off his work, a marvelous idea strikes show-starlet Tina DeCara right in the brain: Lemme ask Ian to direct the video for my new song, “Me and You.”

“After seeing Ian’s music video, I was, like, 'Whoa. This is very interesting!'” she explained. “He can totally be himself in front of the camera and it’s super-organic.”

Ian, of course, is game for this, and soon, the team will gather at the 202 Family Diner in Blue Bell to film said video.

This will not occur before we set up the additional plotline of “Marissa setting aside her repetitively stated disdain for Ro-Ro-Rogelio to exploit the latter’s kindness,” though. This takes the form of free glamour photos shot on a seventh-ish-floor balcony at the Windsor Suites at 17th Street and the Ben Franklin Parkway.

But, before we get into that, the show transitions back to the video prep.

Tina, comfortably dressed in garb that leaves little to the imagination at her “Philly condo” …

Wow I just saw my boobs bounce on national tv... Yes they are real. #SMFonFUSE

… has a creative brainstorming session with Ian. Soon, they will be at the diner, which Tina thinks “smells like crayons,” to put those ideas into action. That production process will foment an air in which doubt, betrayal and sensuality seep into the plotline.

Specifically, nobody seems to think Ro-Ro-Rogelio is a comfortable fit for the lead role of "guy eating at diner who takes a liking to the saucy-minx waitress." (To this viewer, it seemed as if Ro-Ro’s mojo was working double time to ensure there were no visible signs of -- hmm, how best to put this? -- excitement as women, and Ian, grinded on him.)

“It doesn’t look right,” Marissa says of Rogelio as she joins Ian and Tina at a table for a post-rehearsal confab.

“And that’s not a bad thing,” notes Tina, who leaves the discussion with a desire to ask last week’s co-host Jesse to fill in for Ro-Ro at the real shoot. This video is too big a deal to allow friendship obligations to overshadow creative results.

While Tina rues telling Ro-Ro this decision, it falls to Marissa to delve deeper into the issue with him on the Center City balcony. After a discussion about “FIPAs” (real acronym: FUPA), the awkward chat goes something like this:

Ro-Ro: Yo, what’s up with wanting to replace me on the video shoot?

Marissa: Yo, you have the hots for Tina, but there you are being the super-shy, keeps-his-hands-to-himself boy.

Ro-Ro: This hurt my feelings.

Marissa: If these photos don’t turn out well, I will chop off your genitalia and throw it off the balcony.

It seems as if these threats went unfulfilled.

Fast forward to shooting day at the diner. Jesse totally bags on the whole thing, calling to cancel at the last minute because it’s not his “style.” An air of catty ‘tude comes through the screen during this scene. For Tina, though, she has her loyal side (creative) piece there to fill in (after crudely dissing Jesse, of course).

Tina thinks the shoot went awesome. There’s such an air of positivity coursing through these kids that it’d be hurtful to critique said video. So, let’s move on to a) the preview for next week’s season finale, which has cricket sounds respond to Ro-Ro’s asking Tina on a date and b) the fact that we finally get to "Dancin’ on Air" with three minutes left in the episode.

Casey Reed – the host – makes exactly zero appearances in this episode. The same can’t be said for some kind of performer called Lexa Terrestrial – the “cute and perky” singer who, in producer Patti’s estimation, “has a great gimmick."

However, Ms. Terrestrial throws the show into uproar by – wait for it – singing live on a show where lip-syncing is the rule of the land and a preferred musical shortcut.

Instead of taking a deep mental dive on what the aversion to live music says about the very essence of a television program on which people are filmed dancing LIVE ON AIR, let’s watch a Lexa Terrestrial video.

Anyway, now all we have left is next week's season and/or series finale, described as such: "The season wraps up with auditions for next year. Casey and Brittany celebrate their one-year anniversary and reflect on a busy year. Rogelio finally asks Tina out on a date. Will they finally end up together, or is her heart in a different place?"

Jalen Hurts will be the Eagles' No. 2 quarterback vs. Rams