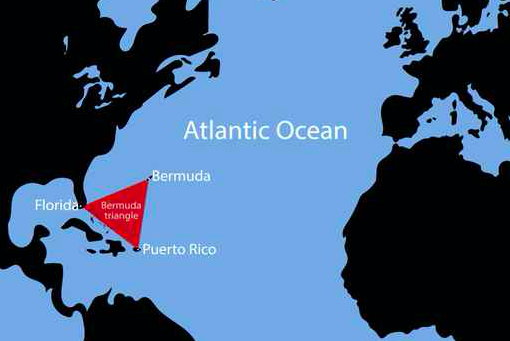 A colony of aquatic Bigfoots living in the Bermuda Triangle has been chanting in strange seismogenic tongues and causing planes and boats to disappear for decades, in case you've been taking a break from Facebook.

Not really, but there is a new theory out there to explain the popular belief that the Devil's Triangle — an area of about 500,000 to 1,510,000 square miles off the coast of Florida — is responsible for a mysterious and inexplicable pattern of paranormal activity.

Has the mystery of the Bermuda Triangle been solved? https://t.co/YcRzS9PpG2 pic.twitter.com/3HxcOCZLkW

"Air bombs," according to a new Science Channel documentary, have been producing a violent maelstrom of winds whipped up by hexagonal clouds in the atmosphere.

"They are formed by what are called microbursts and they're blasts of air that come down out of the bottom of a cloud and then hit the ocean and then create waves that can sometimes be massive in size as they start to interact with each other," meteorologist Randy Cerveny, a professor of geographical sciences at Arizona State University, says in the documentary.

Many theories have been proposed over the years to make sense of unusual occurrences in the Bermuda Triangle, including the vanished USS Cyclops in 1918, the disappearance of Flight 19 in 1945 and the El Faro disaster of 2015.

Some of have suggested it's magnetic anomalies affecting compasses, some say it's the circulation of the Gulf Stream, some say it's methane hydrates causing "mud volcanoes," and some say it's plain old human error.

As Gizmodo reported in 2014, dispatches of odd activity in the region first entered the mainstream in the 1950's after Associated Press reporter Edward Van Winkle Jones published a story about the disappearance of boats and ships in the region. Vincent Gaddis, a writer for men's magazine "Argosy," coined the term "Bermuda Triangle" in 1964.

The mystery really gained momentum in the 1970's when Charles Berlitz published the best-selling "The Bermuda Triangle," setting off a steady stream of speculation ranging from theoretical science to UFO interference.

These days, some researchers think the whole thing is malarky. And they have a point. Earlier this month, a made-up report published by a fake scientist claimed to have found giant crystal pyramids at the bottom of the triangle. It was not even remotely a true story.

Live Science investigated claims about the Bermuda Triangle in 2014 and drew from the research of journalist Larry Kusch, who wrote another book called "The Bermuda Triangle Mystery — Solved." In it, Kusche ripped apart the allegedly sloppy research Berlitz conducted for his hit book.

"If Berlitz were to report that a boat were red, the chance of it being some other color is almost a certainty," Kusche reportedly said.  More from Live Science:

In some cases there's no record of the ships and planes claimed to have been lost in the aquatic triangular graveyard; they never existed outside of a writer's imagination. In other cases, the ships and planes were real enough — but Berlitz and others neglected to mention that they "mysteriously disappeared" during bad storms. Other times the vessels sank far outside the Bermuda Triangle.

Lately, theorists have simply suggested that the area is heavily traveled by cruise and cargo ships and therefore prone to a greater number of wrecks.

The science reported in the new "What on Earth" documentary has not been peer-reviewed, and in fact the same researchers have found similar cloud patterns over the North Sea off the coast of the United Kingdom without a corresponding high incidence of disasters. Does it mean none of this has merit? Maybe not.

In an email to Mic last week, atmospheric scientist Brian Soden of the University of Miami bluntly called the air bombs theory "garbage."

The debate, it seems, has just been reinvigorated with a particularly jarring hypothesis fit for 2016. Here's what some people have had to say about it on Twitter.

I feel like if I got really really high & with the right information, I could figure out the bermuda triangle mystery.

Scientists have solved the mystery of the Bermuda Triangle. Turns out the butler did it.

SO there is a Bermuda Triangle explained post with the promo image including Amelia Earhart. SHE WAS LOST IN THE PACIFIC. GUYS. COME ON.

you: hexagonal clouds are to blame for the bermuda triangle mystery
me, an intellectual: aliens .

In other news, my bedroom has become the Bermuda Triangle bc I lost at least 3 things in here this weekend that I know haven't left the room

The Bermuda Triangle used to be the Bermuda Square, until Chuck Norris Roundhouse kicked one of the corners off.