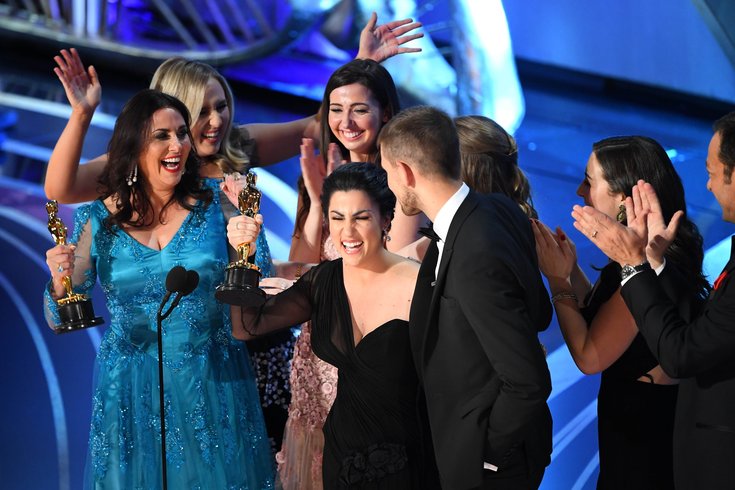 Rayka Zehtabchi and Melissa Berton accept the Oscar for best documentary short subject, 'Period. End of Sentence.' during the 91st Academy Awards at the Dolby Theatre.

Sliney is an executive producer on the now award-winning documentary short "Period. End of Sentence.," which told the story of stigmas surrounding menstruation in a rural village outside New Delhi in India.

Sliney started work on the project when she was still in high school in Los Angeles. It was at a U.N. Commission on the Status of Women hearing where she and her friends learned that in some developing countries, women don't have access to sanitary pads — often causing them to drop out of school.

This led Sliney to eventually form the nonprofit The Pad Project, which works with local experts and activists to bring a specially-designed machine to developing countries that actually makes biodegradable pads from locally sourced materials.

In "Period. End of Sentence." women from Haipur, India, work to install this machine in their village, discuss the stigmas behind menstruation, and the importance of education.

Sophomore Claire Sliney has been nominated for an Oscar in the documentary-short-films category for “Period. End of Sentence.” She is the film’s co-executive producer. It “feels like an out-of-body experience,” says Sliney. https://t.co/Zz8nDg8B2I pic.twitter.com/SFBz5iTtA0