'Green Book' wins best picture in upset at the 2019 Oscars 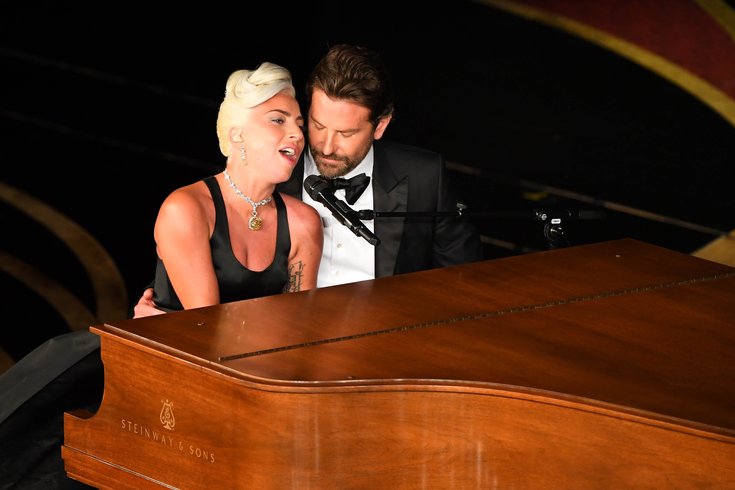 Lady Gaga and Bradley Cooper perform together during the 91st Academy Awards at the Dolby Theatre.

The 91st Annual Academy Awards aired Sunday and what was expected to be a nightmare of a show turned out to be decent affair full of timely jokes and apt presenters.

RELATED LINK: The looks of Oscar: The red carpet

Not all the winners who were favored to win won. In fact, there were a number of upsets, including "Green Book" winning for best picture.

But the highlight of the evening was truly women and diversity. "Black Panther" won three awards, including Ruth E. Carter who became the first African American to win for best costume design. Spike Lee won his first Oscar for "BlacKkKlansman." "Period. End of Sentence," a documentary about a village in India combating the stigma of menstruation,  won for best documentary short - and certainly won for best acceptance speech. ("I can't believe a film about menstruation just won an Oscar!")

Rami Malek won best actor for his portrayal of Freddie Mercury in "Bohemian Rhapsody" while Olivia Coleman edged out Glenn Close for best actress for her turn as Queen Anne in "The Favourite."

This year the awards ceremony may have gone without a host, but you know, maybe that's something they should do more often.

Read below to follow along on the night's events. 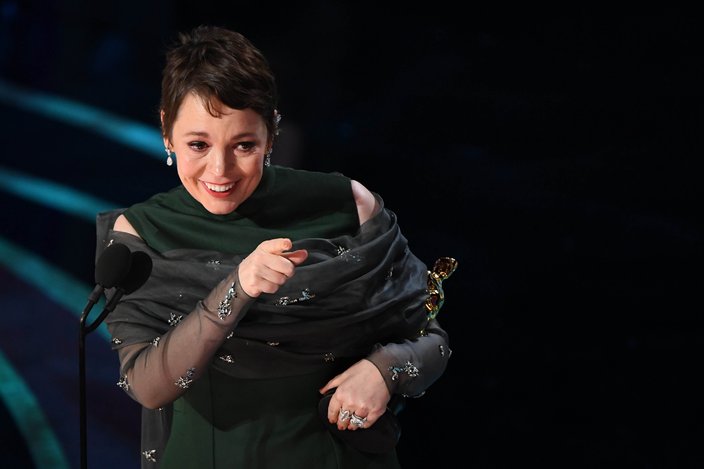 Olivia Colman accepts the award for best performance by an actress in a leading role for her role in “The Favourite” during the 91st Academy Awards at the Dolby Theatre.

Update [6:45 p.m.]: So far the red carpet has been a tapestry of color with many ladies, including Oscar-nominated Melissa McCarthy,  wearing suits. The pink on the red carpet just keeps growing, from Helen Mirren to Gemma Chan. It's hard not to escape it, and I have to say, as someone who is pretty partial to all things pink, it actually looks pretty amazing. #PinkForever

Update [7:55 p.m.]: The red carpet has bid adieu and the actually awards ceremony is about to begin. Best dressed is a bit of toss up for me between Lady Gaga, Jennifer Lopez, and Helen Mirren. All look absolutely stunning, but it might be Gaga's 120-something carat necklace that truly stole the show. (Like, dang.)

Update [8:00 p.m.]: Queen opened the show, and I have to say, it was a pretty great performance. Though I'm just glad to see the Oscars didn't start the show with a musical number starring Rob Lowe and some actress dressed as Snow White again.

Update [8:11 p.m.]: Amy Poehler, Tina Fey, and Maya Rudolph delivered the opening monologue and it was everything I could have ever wanted.

Update [8:23 p.m.]: So far, Regina King has won an Oscar for best supporting actress (deservedly so), and "Free Solo" won for best documentary. ("Free Solo" may or may not have said some words they shouldn't have used.)

Update [8:43 p.m.]: "Black Panther" wins again for production design. Tyler Perry then fired some serious shots at the Oscars for almost cutting the cinematography category from the broadcast. (Yes, more of this please. Let's turn this night into an Oscars roast.)

Update [9:00 p.m.]: "Bohemian Rhapsody" wins both best sound mixing and sound editing. (So, I take back what I said from before. Maybe Queen is best dressed? Those are some serious velvet suits.)

Update [9:08 p.m.]: "Roma" wins its second Oscar of the night. This is the first time Mexico has won for best foreign language film. Keegan-Michael Key then flew into the event like a Mary Poppins we didn't even know we needed.

Update [9:20 p.m.]: "Bohemian Rhapsody" wins again for best film editing. This was another category the Academy almost cut from the broadcast - because, you know, it's so easy to cut film down to the right microseconds without comprising quality. NBD.

Update [9:39 p.m.]: Kacey Musgraves presents an almost-cut-from-broadcast best song nominee performance for “When A Cowboy Trades His Spurs For Wings” from “The Ballad of Buster Scruggs." (And somehow did it so flawlessly despite the fact she was being eaten alive by her dress.)

Update [9:43 p.m.]: We are not worthy! Mike Myers and Dana Carvey together again?  That may have been my favorite moment of the Oscars so far.

Update [9:49 p.m.]: "I'm not crying because on my period or anything." No other speech can top this acceptance speech.

Update [10:02 p.m.]: Wow, Philly native Bradley Cooper and Lady Gaga absolutely killed it in their performance of "Shallow." It was raw and moving in all the right ways. Absolutely beautiful. (Though fans who speculate the two are in love definitely have more to speculate with. Seriously, did you see the look those two gave each other? Just sayin'.)

Update [10:47 p.m.]:  Rami Malek, while giving thanks for his best actor win for "Bohemian Rhapsody," "I may not have been the obvious choice, but I guess it worked out." 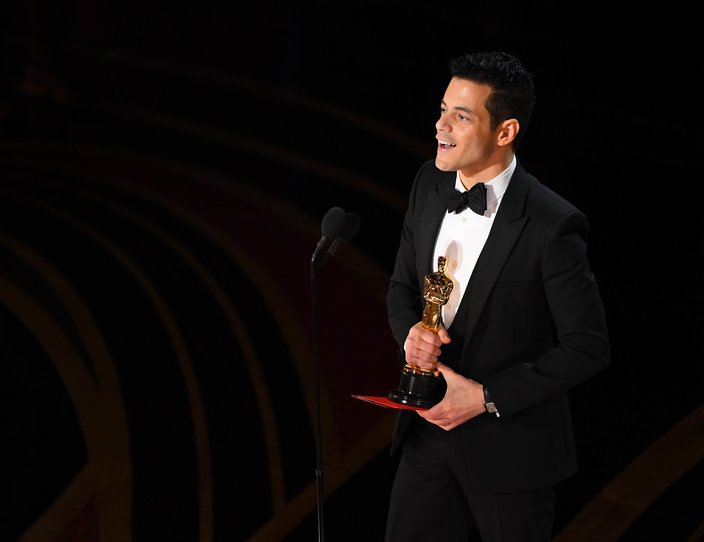 Rami Malek accepts the award for best performance by an actor in a leading role for his role in “Bohemian Rhapsody” during the 91st Academy Awards at the Dolby Theatre.

Update [10:59 p.m.] Olivia Coleman won best actress for "The Favourite," beating out Glenn Close, who has racked up seven nominations with no wins as of yet. (That also may have been the cutest speech of the night. Coleman, you are adorable.)

Below are Twitter updates from local and national fashion and entertainment trend spotters and influencers. Scroll past for a listing of all the nominees and winners.

Bradley Cooper, “A Star Is Born”

Lady Gaga, “A Star Is Born”

Melissa McCarthy, “Can You Ever Forgive Me?”

Sam Elliott, “A Star Is Born”

Richard E. Grant, “Can You Ever Forgive Me?”

“Can You Ever Forgive Me?,” Nicole Holofcener and Jeff Whitty

“A Star Is Born,” Eric Roth, Bradley Cooper, Will Fetters

"A Star is Born," Matthew Libatique

“Of Fathers and Sons,” Talal Derki

“A Night at the Garden,” Marshall Curry

“All The Stars” from “Black Panther” by Kendrick Lamar, SZA

“When A Cowboy Trades His Spurs For Wings” from “The Ballad of Buster Scruggs” by Willie Watson, Tim Blake Nelson